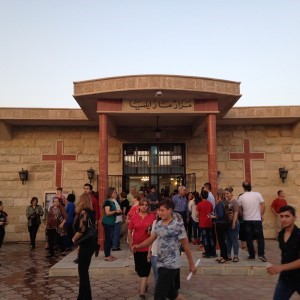 In early June, IDC leaders met with Cor-Bishop Yatron Koliana in the Assyrian Quarter of Bouchriyeh, Beirut (Lebanon) and discussed the latest news on refugees coming from Syria. In Ankhawa, Erbil, which is hosting most of the Christian refugees from Qaraqosh, a town on the Nineveh Plain, IDC leaders met with the Chaldean priest Fr. Douglas Bazi. The purpose of the visit was to be present to listen to people’s stories, follow up on their needs, and join them in prayer at a Mass at the Mar Elia Church in Ankhawa.
To view a video of the Mass, click here: https://www.youtube.com/watch?v=GJxaMyJSmvw

On 8 June, IDC joined forces with International Christian Concern (ICC) to host a briefing on Capitol Hill about “How Christianity Will Survive in Iraq: Prospects for a Political Solution.” About 60 congressional staffers and policy makers attended.

The speakers at the event were Professor Carole O’Leary of the Iraqi Kurdistan Religious Freedom and Human Geography Mapping Project, Remziya Suleyman of the Kurdistan Regional Government Representation in the United States, Jeremy Barker of International Christian Concern, and William Spencer of the Institute for International Law and Human Rights.

For a full audio recording of the event (excluding Q&A) click here: https://drive.google.com/file/d/0B8yPrqdNwHjubjZfWk0wdkpfRWs/view?usp=sharing

As part of its push to raise a broader base of awareness and support across the United States, IDC is launching new chapters in New York, New Jersey, DC, Maryland, Virginia, Pennsylvania, Arizona, and Florida.

The chapters are bringing together people from widely diverse backgrounds who share a common interest in IDC’s mission. As IDC continues to gain momentum, these local groups will play a key role in unifying the Christian diaspora and all people of good will who share the desire to help persecuted Christians in the cradle of Christianity.

The new chapters, along with existing ones in California and Illinois, will also receive training at the upcoming IDC National Leadership Convention, to be held from September 9 to 11 in Washington, DC. Members will participate in a chapter-building workshop and a Capitol Hill workshop, and chapter leaders will be able to meet with congressmen to discuss their concerns 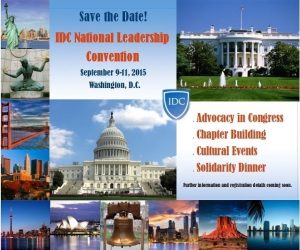 To RSVP for the IDC September National Convention, please click on this link: https://idc-national-leadership-convention.eventbrite.com

IDC Communications Director Ninar Keyrouz made a brief appearance on BBC Radio with Matthew Wells to discuss IDC’s mission on behalf of the Christian communities in the Middle East. The segment will air in the upcoming weeks, so stay tuned for more details.

On June 3, IDC Executive Director Kirsten Evans and Director of Media Communications and Outreach Ninar Keyrouz, participated in an international coalition meeting co-sponsored by Americans for Tax Reform and the Atlas Economic Research Foundation. The meeting, which was held as a roundtable discussion, brought together free-market Americans and international activists to share best practices and ideas for grassroots campaigning. During the meeting, our representatives were given a promotional spot to discuss IDC’s charities and aid outreach.