IDC embedded crosses within the hashtag image as a visual reminder of the ongoing persecutions endured by Christians in the Middle East. 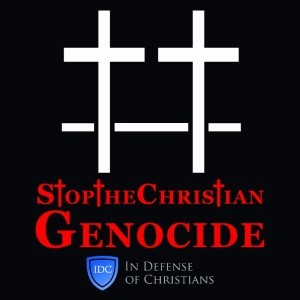 IDC donated $12000 to St. George School in Qlaayaa, Lebanon. The Catholic sisters running the school send IDC a thank you note for its contribution.

The school used the funds to subsidize tuition for 15 Iraqi Christian students. “These students and their families refused to deny their Christian faith and therefore suffered grave violations of basic human rights, including freedom of religion and freedom of speech.” The school still needs $2000 for each student in kindergarten.

The sisters of Saint Joseph De Lyon from St. George School in Qlaayaa, Lebanon, concluded the letter saying, “We thank you again and ask God to bless you by giving you in return more than you have donated to us. May he bless you with health, peace, and the ability to continue supporting those in need.” 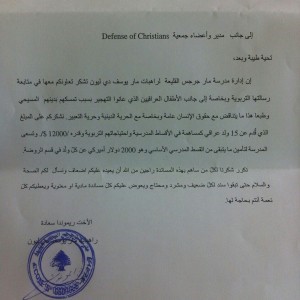 Andrew Doran, IDC Senior Advisor, wrote an article in favor of supporting and arming the Kurds in the fight against ISIS.
National Review published the article “Recognize Kurdistan and Arm It, against ISIS in Northern Iraq” on May 28, 2015.
Andrew illustrates a number of political, historical, cultural and religious issues complicating the status of Iraq as one nation. He also highlights the role of the Kurds, who are committed to fighting ISIS, but need greater international assistance to succeed.

The article can be read here: http://www.nationalreview.com/article/418934/recognize-kurdistan-and-arm-it-against-isis-northern-iraq-andrew-doran

The IDC Chicago Chapter held a general meeting on May 13, 2015.
IDC appointed Deacon George Kourieh as chairman of the Chicago chapter. Deacon George also advocates on behalf of Christians in the Middle East through his participation in events that foster dialogue between Christians and Muslims.

Deacon George welcomed a number of new members to the chapter and highlighted the importance of working together to engage both Eastern and Western churches in supporting Christians in the Middle East and North Africa. Representatives from a variety of Christian churches form part of the Chicago chapter, demonstrating their commitment to unity and solidarity.
The churches included the Ancient Assyrian Church of the East, Saint Mary Antiochian Orthodox Church, Saint Afrem Syriac Orthodox Church and many more.

The chairman stressed that many Americans are not aware of critical, often life threatening conditions Christians face in the Middle East. He called on the members of the Chicago chapter to build relations with Jewish and moderate Muslim counterparts, raise awareness and educate others. 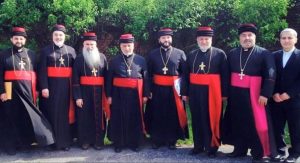 The representatives from the two Churches prayed the Lord’s Prayer together to express their desire for unification. The Churches split in 1964, when the Ancient Church of the East broke away over issues of hereditary succession and dates in the liturgical calendar.

Both Churches exchanged recommendations for unity to be studied in their respective synods and then examined together at another meeting.
This dedication to Christian unity reflects the Lord’s Prayer “That they all may be one. As you, Father, are in me and I am in you, may they also be one in us” (Jn 17:21).

IDC shares this goal and advocates for unity among the Christian diaspora to protect and preserve the fundamental rights of Middle Eastern Christians.