IDC, in partnership with CitizenGo, took part in the “#WeAreN2016″ International Congress on Religious Freedom, which was hosted the Holy See’s Permanent Mission to the United Nations. The event took place in New York from April 28 to 30 and featured international political and religious leaders as well as human rights experts. The event also enabled Christian and Yazidi victims of persecution in Syria, Iraq, Nigeria and Pakistan to give testimony to the tragedies they have endured.

IDC Advisory Board Member Dr. Thomas Farr spoke about the dire situation of the Christian and other religious minorities who remain in Iraq and Syria and reiterated that the international community must consider the establishment of an autonomous, multi-religious, multi-cultural and multi-ethnic safe zone in Northern Iraq in order to ensure the survival of Christianity in the region.

IDC Executive Director Kirsten Evans chaired the panel “Christian and Yazidi Women and Girls: Sexual Victims of Crimes Against Humanity”. One participant, a 15-year-old Yazidi girl, who was in ISIS captivity for six months, shared her tragic story and brought many in the audience to tears.

IDC Haven Project Managing Director Stephen Hollingshead moderated an afternoon panel entitled “Religious Persecution: The Voice of the Victims.” He conversed at length with Samia Selman, a Yazidi escapee of the ISIS sex-slave trade, and Carl and Marsha Mueller, parents of Kayla Mueller, a young aid worker and ISIS hostage who was killed in Syria. 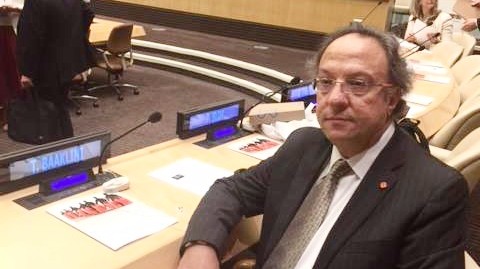 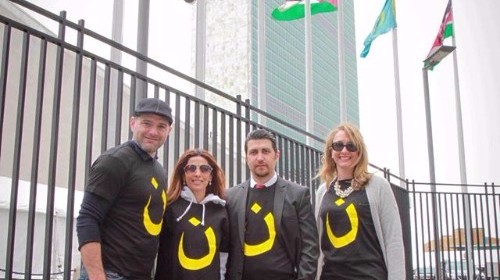 IDC Senior Advisor Jordan Allott, Director of Media and Communications Ninar Keyrouz, Special Iraq Advisor Loay Mikhael and Executive Director Kirsten Evans in front of the United Nations as IDC signs a petition requesting that the United Nations declare that ISIS is perpetating genocide against Christians in Syria and Iraq. 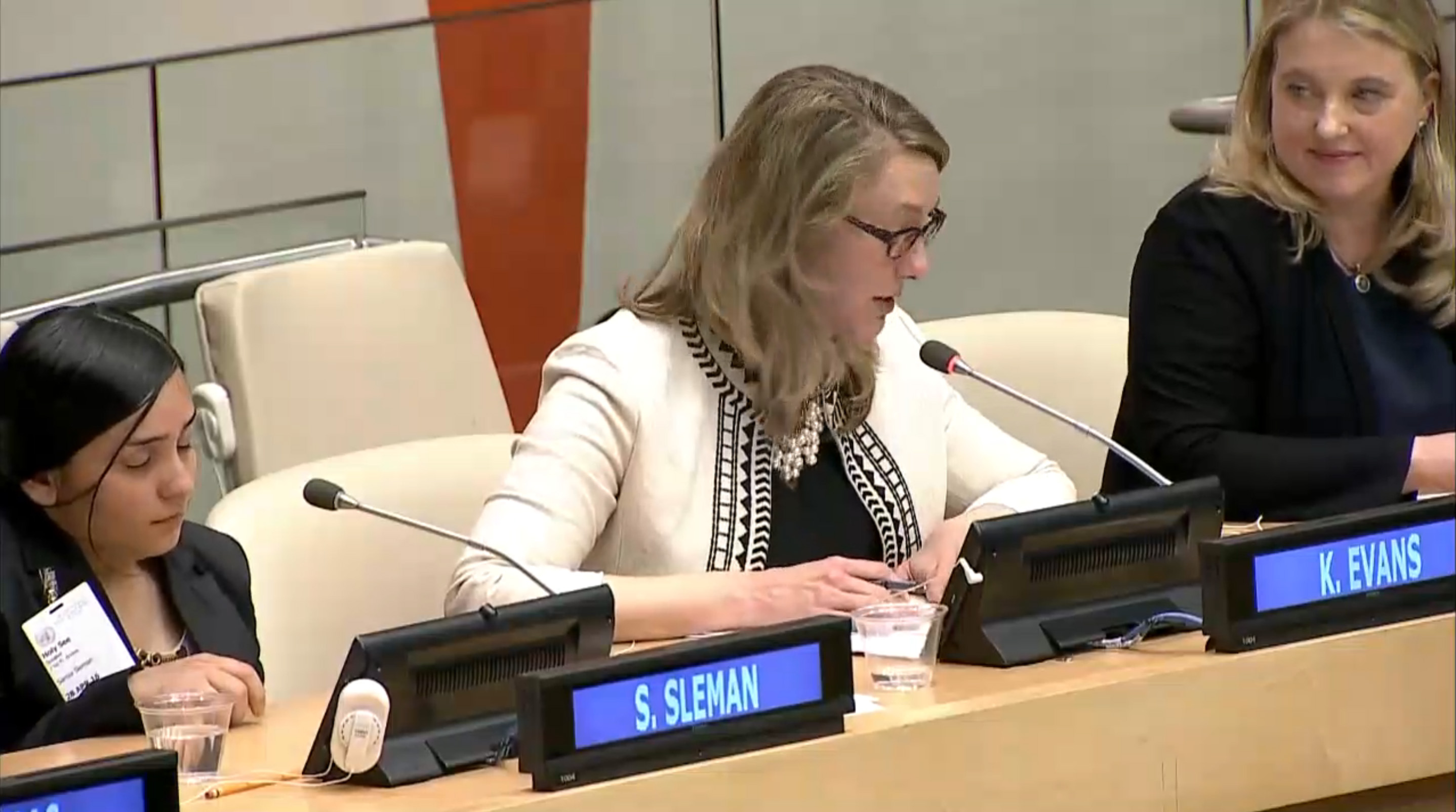 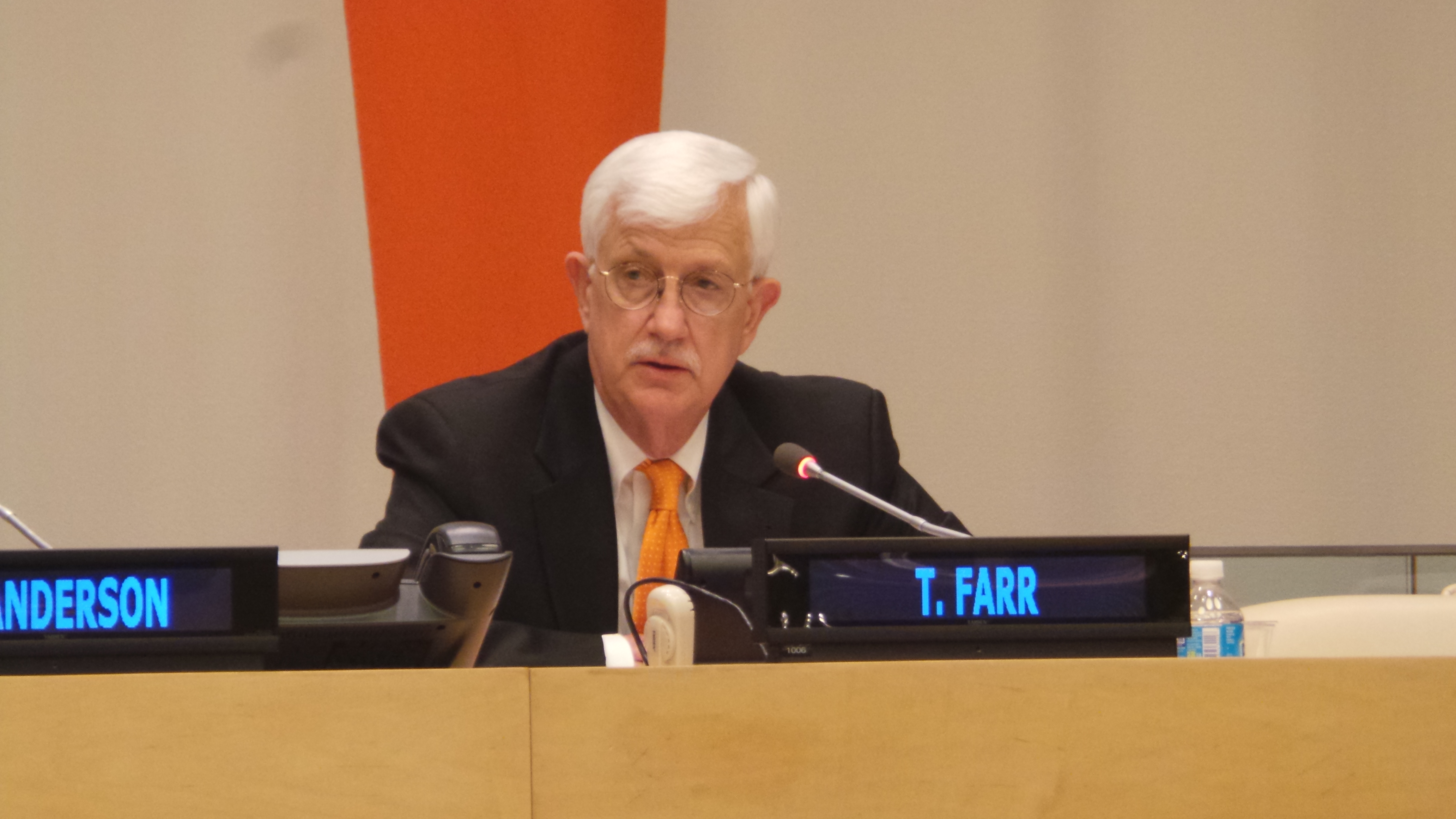 IDC Board Advisory Member Thomas Farr speaks as a panelist on “Protecting Victims of Persecution and Fostering Religious Freedom Worldwide” at the #WeAreN2016 Conference at the United Nations. 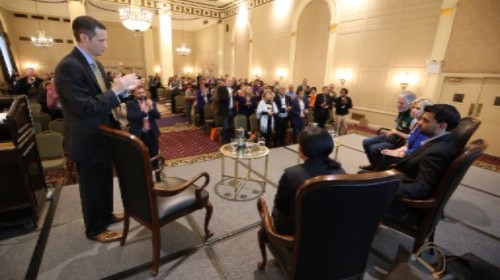 IDC Haven Project Managing Director Stephen Hollingshead moderating the panel on “Religious Persecution: The Voice of the Victims”, as part of the “WeAreN2016” conference in New York. 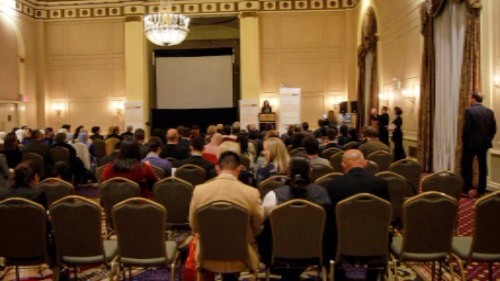 IDC Senior Advisor Jordan Allott and IDC Director of Media and Communications Ninar Keyrouz present the trailer of the film “Our Last Stand”, in partnership with IDC, at the “WeAreN2016” conference in New York.

Following the success of the “Power and Persecution” Symposium, which was held in partnership with St. George Orthodox Christian Cathedral and hosted over 300 attendees, IDC held its first official chapter meeting May 5th in Wichita, Kansas. More than 60 people met to hold elections and start the Wichita chapter.

IDC Director of Media and Communications Ninar Keyrouz briefed the attendees about IDC’s latest achievements, announced fellow chapters’ projects for the summer of 2016 and oversaw the elections, which resulted as following:

In Oklahoma City, IDC Director of Media and Communications Ninar Keyrouz was introduced to an ecumenical crowd of around 40 people at St. Elijah’s Antiochian Orthodox Church. The meeting was organized by Reverend Father John Salem of St. Elijah’s and Father Paul O’Callaghan, Dean of the St. George Orthodox Catholic Cathedral in Wichita.

This meeting was covered by the local media. The state paper, The Oklahoman produced a story pn the event, which was picked up internationally and published by the official news web site of Russian Orthodox Church, www.pravoslavie.ru. (See below, “IDC in the News”). Attendees showed high interest in joining IDC and starting an Oklahoma chapter. 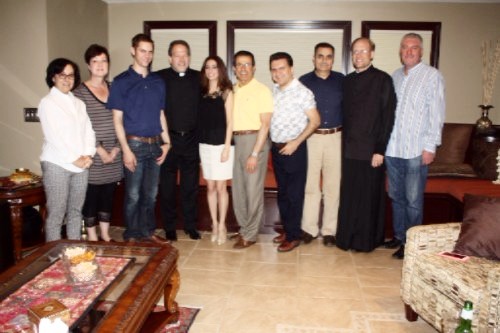 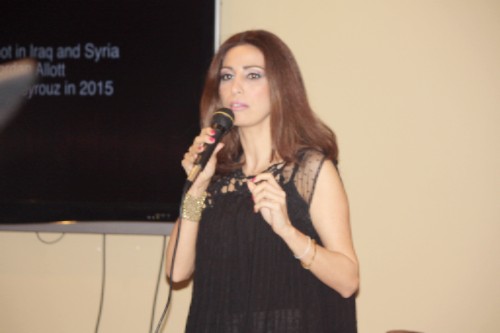 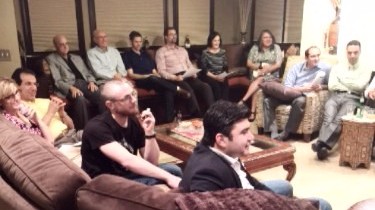 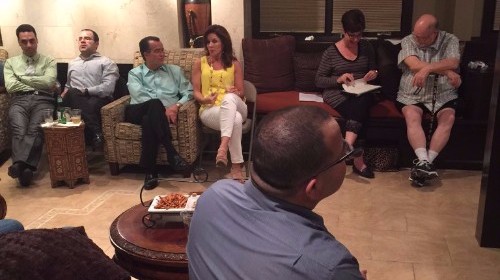 The Very Reverend Father John Salem of St. Elijah’s Antiochian Orthodox Church in Oklahoma city introduces IDC Director of Media and Communications Ninar Keyrouz to an ecumenical group interested in joining IDC and raising awareness about the Christian plight in the Middle East.

Manero spoke briefly about the work of IDC and its accomplishments, including the unanimous passage of the U.S. House of Representatives Resolution 75, which declares ISIS guilty of perpetrating genocide against Christians and Yazidis in Iraq and Syria. Many attendees showed great interest in IDC and signed up to learn more about the Denver Chapter. A few also volunteered to help continue building the Denver Chapter. 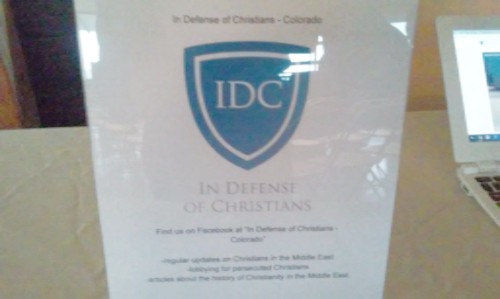 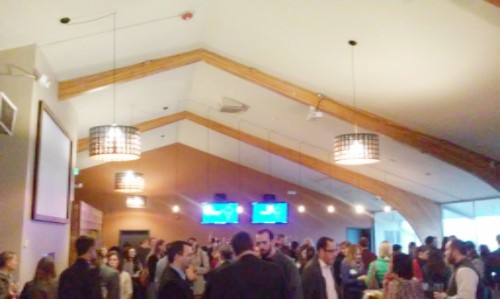 On May 20, IDC Colorado Chapter member Father Andre Mahanna, pastor of St. Rafka Maronite Catholic Church, organized an Ecumenical Prayer Breakfast with Orthodox, Evangelical and Protestant religious leaders in order to promote and pursue unity in the face of the global persecution of Christians. The event was galvanized by the unanimous passage of the U.S. House Congressional Resolution 75 by the U.S. House as well as the State of Colorado’s unanimous bicameral passage of HJR 16-1013. Both resolutions declare that ISIS is guilty of perpetrating genocide against Christians and other minorities in the Middle East.

The breakfast was attended by their Excellencies Archbishop Samuel Aquila of the Roman Catholic Archdiocese of Denver and Bishop Elias Zaidan of the Maronite Catholic Eparchy of Our Lady of Lebanon of Los Angeles, as well as many other religious leaders and concerned citizens who stood in solidarity to publicize the plight of modern-day martyrs and refugees.

More than 30 religious leaders and 200 + people attended the St. Rafka Mission of Hope and Mercy event to learn about and reflect upon the sufferings of refugees.

The Ecumenical Prayer Breakfast is inspired by the courage of Pope Francis and the Eastern Patriarchs of Constantinople, Moscow, and Alexandria and the PLACE Initiative and was held in response to the urgent call of The Assembly of Catholic and Orthodox Patriarchs and Bishops of the Middle East in Lebanon to attend to the Christian suffering in the Middle East. 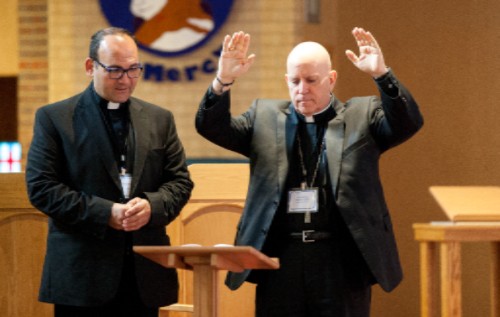 On May 3rd, the IDC Arizona Chapter, led by Bill Fathauer and Simone Rizkallah, partnered with with Bishop Thomas Olmsted of the Roman Catholic Diocese of Phoenix and his parishioners, as well as the Chaldean Catholic Diocese of St. Peter, for event about Christians on the plight of Christians in the Middle East at the at Xavier College Preparatory auditorium. Guest and speaker Father Douglas Bazi of the Chaldean Catholic Church of Iraq spoke of the many Christians in his community who have been driven from their homes in the face of the ongoing genocide committed by ISIS.

Hundreds of attendees from the Iraqi Christian community in Phoenix as well as supportive members of the Roman Catholic, Eastern Catholic, and Protestant communities participated in the event. Among them were IDC Arizona Chapter members who helped share the IDC Mission with the people present.

Arizona Chapter members also talked about IDC’s work in Washington, D.C., as well as the the resolution that Arizona State Senate resolution SM1001, which passed unanimously. The IDC Arizona Chapter tirelessly advocated for this bill and deserves enormous praise for its successful passage. 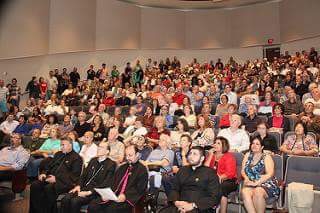 This report was aired repeatedly on Fox News Friday June 3, 2016, and is featured on Fox Website as well. The video of the Christian Iraqi woman telling her story to IDC president was taped by IDC team during their trip to Iraq this past April. Fox News aired it first and exclusively. 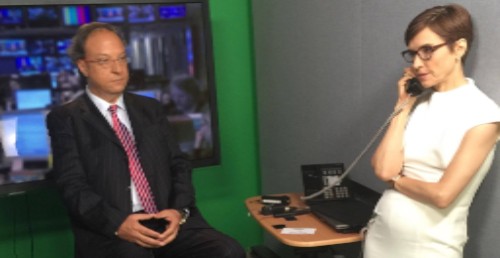 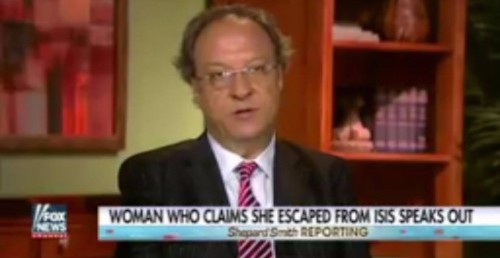 The Washington Examiner:A Christian imprisoned in Turkey.
Op- Ed by IDC Senior Advisor Jordan Allott following his trip to the Middle East for the filming of his documentary “Our Last Stand”, in partnership with IDC. 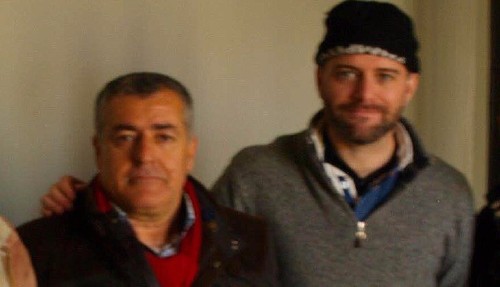 Denver Catholic Online:Ecumenical community rallies at second annual prayer breakfast.
Aaron Lambert covers the event “organized by Father Mahanna (IDC Colorado chapter member), who serves as the director of ecumenism for Our Lady of Lebanon Eparchy and is also the pastor of St. Rafka’s Maronite Catholic Church in Lakewood. The event was held at St. Bernadette Catholic Church in Lakewood.

Pravoslavie Online, the official news website for the Russian Orthodox Church:Orthodox Church in Oklahoma City Considers Joining Group to Aid Christians Persecuted in the Middle East: “Ninar Keyrouz, director of media and communications for In Defense of Christians, said her organization is working to increase the American public’s awareness of Christian persecution in the Middle East and give people ways they can help this group of believers.”

Fox Radio News:Interview with IDC Director of Media and Communications Ninar Keyrouz
Jonathan Wachtel of Fox News discusses with Keyrouz the #WeAreN2016 International Congress on Religious Freedom, which IDC sponsored with CitizenGo and was hosted by the Permanent Observer of the Holy See to the United Nations.
Keyrouz spoke about IDC’s request to the United Nations to immediately attend to the needs of Christians in Syria and Iraq. 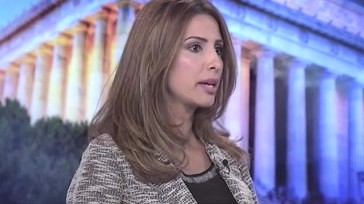 EWTN News Nightly:IDC Senior Advisor and Producer Jordan Allott talks to Brian Patrick about showing the trailer for his documentary at the United Nations.

IDC Senior Advisor and Producer Jordan Allott discusses showing the trailer for “Our Last Stand” at the “WeAreN2016” Congress on International Religious Freedom as well as other significant events at this conference.

EWTN News Nightly:IDC Senior Advisor and Producer Jordan Allott Talks to Brian Patrick About Showing the Trailer for His Documentary at the United Nations.

IDC Senior Advisor and Producer Jordan Allott discusses showing the trailer for “Our Last Stand” at the “WeAreN2016” Congress on International Religious Freedom as well as other significant events at this conference. 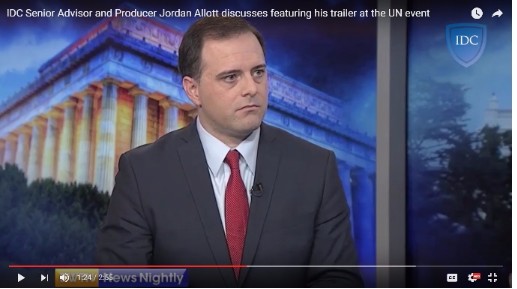 The Oklahoman’s Carla Hinton interviews IDC Director of Media and Communications Ninar Keyrouz in which she discusses introducing IDC to an ecumenical crowd in Oklahoma City and explains the role of IDC chapters to help raise awareness of the Christian plight in the Middle East. 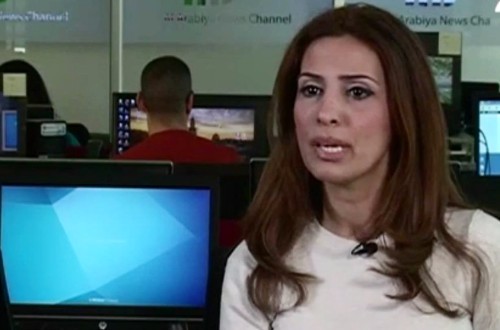 IDC Executive Director Kirsten Evans discusses the Congress with Relevant Radio and recounts ISIS victims’ testimonies as well as the participation of IDC at the event.

Keyrouz speaks about IDC’s request that the United Nations advocate for the restoration of Christian properties in the Nineveh plain as a haven for displaced Christians in Iraq. 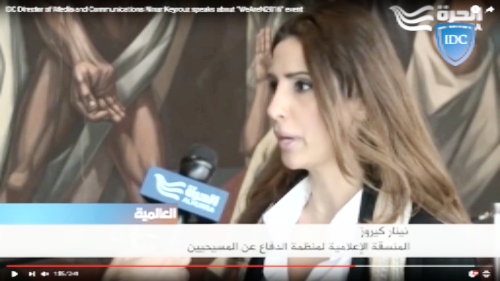 Kirsten Evans discusses the importance of the genocide declaration and the implications of calling the atrocities committed in Iraq and Syria against Christians a genocide. She also talks about her recent trip to Iraq where the many Christian refugees she encountered pleaded their plight and asked for help to return to their communities. 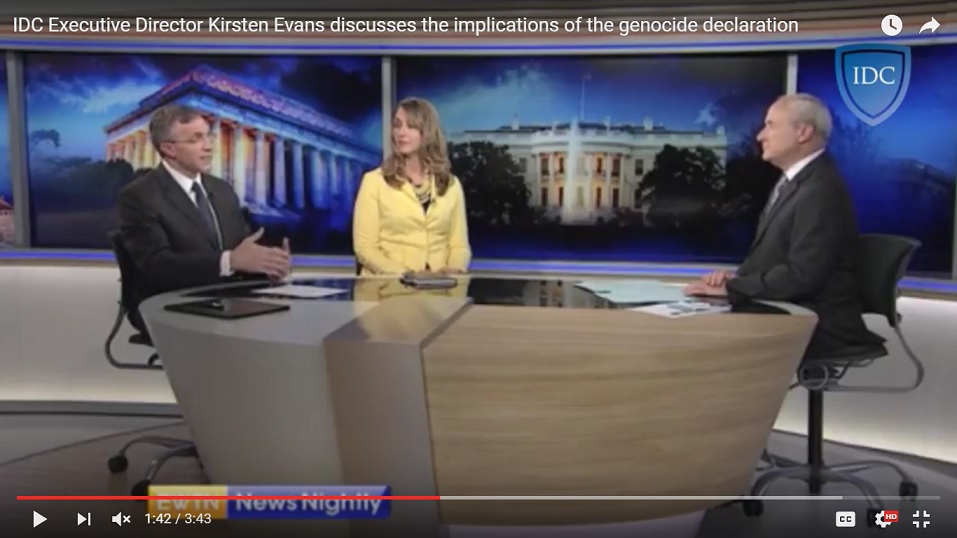 Keyrouz speaks about IDC’s achievements in raising awareness of the Christian genocide and building partnerships in Washington, D.C. 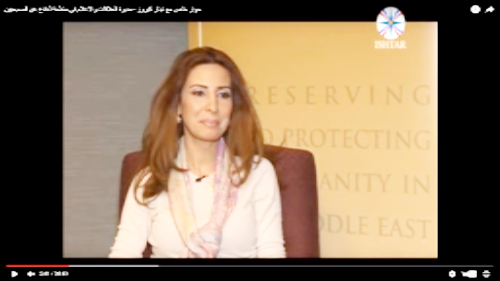 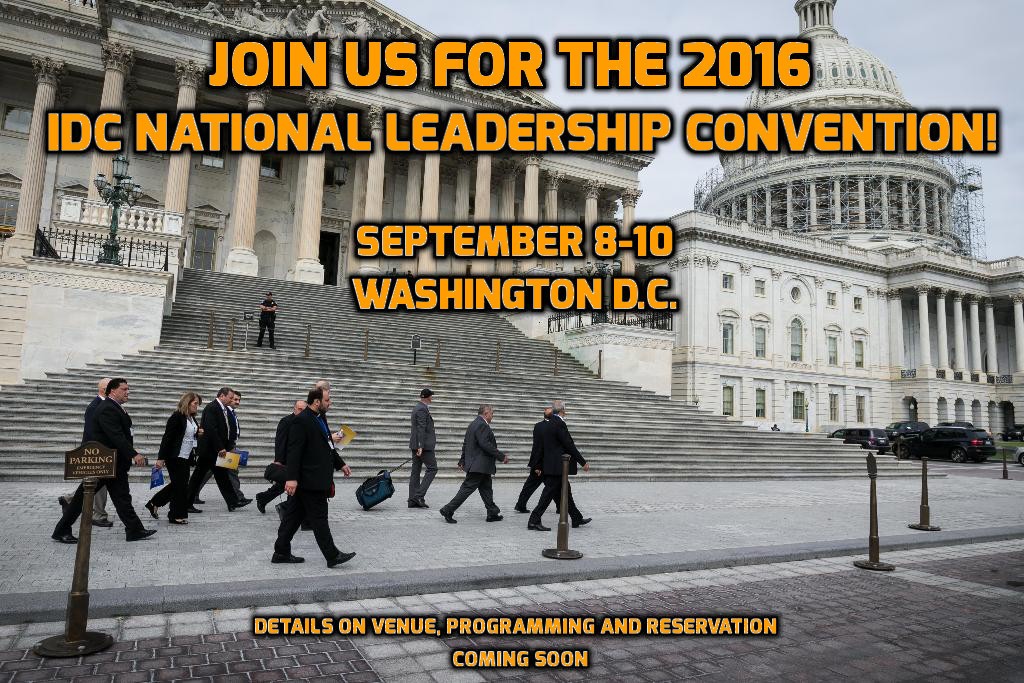