On February 27th, the St. George Orthodox Cathedral in Wichita, Kansas gathered local churches at a Symposium titled “Power and Persecution: The Status of Persecuted Christian Communities in the Middle East.”

IDC Director of Media and Communications Ninar Keyrouz discussed IDC’s mission to mobilize Christians nationally and globally to stop the Christian genocide in the Middle East, pointing out that time is critical. “There is much that can be done by raising awareness, fundraising events, and advocacy,” she added.

Keyrouz urged attendees to sign IDC and the Knights of Columbus’ StoptheChristianGenocide.orgpetition urging Secretary of State John Kerry to declare the Christian persecution under ISIS a genocide. She shared with the attendees the ‘Stop the Christian Genocide’ video andcommercial available on the website.

Rep. Mike Pompeo also attended the event and followed the panelists with brief remarks in which he expressed his strong support to the cause of the preservation and the safety of Christian communities in the Middle East. He also described his observations from the several trips to the region, during which he met with heads of various churches and visited refugee camps.

IDC Leading  Arlington Forum Event “The Story of Christianity in Iraq and Syria.”

Kirsten Evans discussed the history of Christianity in the Middle East and the work of IDC, featuring IDC videos Jordan Allott had worked on for IDC.

Jordan Allott talked about his experiences in Iraq and Syria both in 2014 and 2015 and the individual impact people can have on working to help Christians stay in the Middle East while Loay Mikhael discussed the situation in Iraq during a Q&A session.

IDC Outreach at Our Lady of Mercy Catholic Church in Maryland.

On February 19th IDC Executive Director Kirsten Evans presented to Our Lady of Mercy Catholic Church in Potomac, Maryland on the history and current plight of Christianity in the Middle East and how the broader church community can get involved.  The presentation was part of a larger parish initiative to become more educated about current events effecting Christians worldwide and supporting the issues with parish based projects.

Members from the Southern California IDC Chapter were involved in the organization of an event in honor of Congressman Jeff Fortenberry on Saturday February 20,  hosted by Dr and Mrs Nabil and Raghida Khoury at their beautiful house in Glendale. The event was very well attended by the Southern California Middle Eastern Christian community.  Bishop Elias Zaidan was very gracious to attend and speak at the function. 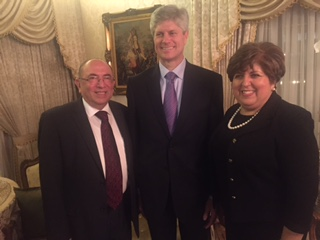 On February 21, 2015, the Los Angeles Maronite Community celebrated the St Maron feast day by having a Mass at the Cathedral of Our Lady of Mt Lebanon. After the Mass, a grand banquet was held at the Beverly Wilshire Hotel, in which Bishop Zaidan inducted Congressman Fortenberry into the Vatican Order of St Gregory. 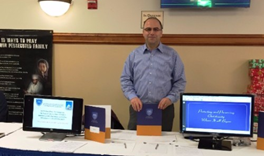 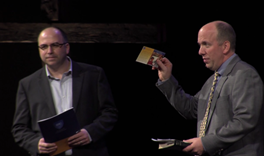 IDC Washington DC chapter member, Marianne Khattar, created and launched the Syria Initiative Project at OakCrest High School in McLean, Virginia. The enthusiastic youth introduced her fellow students and faculty to the plight of Christians in the Middle East and the work of IDC. From February 17 through the month of March, grades 6 through 12 are receiving resources prepared by IDC on Christians in the Middle East. On Wednesday March 2, IDC Advisor Professor Tom Farr of Georgetown University gave a presentation to the entire student body on religious freedom in the Middle East.

The Catholic organization Knights of Columbus and the human rights advocacy group In Defense of Christians have launched a national television ad campaign this week calling on the United States State Department to label the Islamic State’s treatment of Christians as a “genocide.”
Foreign Affairs: ISIS and Genocide. How the United States Talks about Atrocities

The Knights of Columbus Catholic organization and In Defense of Christians, a nonprofit human rights group, have also launched a national media campaign with ads that say “the State Department still hasn’t labeled this extermination what it is. It’s time for action.

Groups such as In Defense of Christians are spearheading petitions urging that Christians be recognized as genocide victims, but the reality is that there are multiple Christian communities in the region, some with an ethnic dimension, and not all may face the same atrocities.

On the morning of Wednesday March 2nd,  the House Foreign Affairs Committee passed by unanimous consent the historic genocide resolution, expressing the sense of Congress that ISIS’ atrocities committed against Assyrian, Chaldean, and Syriac Christians as well as Yezidis and other ethnic and religious minorities, targeted specifically for religious reasons are war crimes, crimes against humanity,  and genocide. The passage of this resolution follows the passage by the European Parliament last month of a similar resolution recognizing ISIS’ systematic killing and persecution of religious minorities in the Middle East as genocide.

Applauding this morning’s decision, IDC President Toufic Baaklini stated, “IDC thanks the House Foreign Affairs Committee and the co-sponsors of H. Con. Res. 75 for calling ISIS’ crimes by the rightful name, a statement that will resonate around the world, and urges the House leadership to bring this bill to a vote and the Obama administration and the State Department to officially recognize the genocide.”