From September 20-25, IDC Executive Director Kirsten Evans was a guest lecturer at the

(ICLC), an international gathering of prominent attorneys, diplomats, church leaders and human rights experts, which took place outside of Vienna, Austria. Senior church leaders, bishops,diplomats, politicians, attorneys, and human rights activists from over ten countries, including the United States, Europe and China, gathered to explore the theme: “Challenges to Being Christian in the Modern World: Legal, Political, and Moral Perspectives.”  IDC’s significant participation marked IDC as a co-sponsor of the event. Guest lecturers included: Mr. Jan Figel, European Union Special Envoy on Freedom of Religion or Belief Outside the EU; Dr. Jan Carnogursky, Former Prime Minister of Slovakia; Ms.Hanna Suchocka, the first female Prime Minister of Poland; Dr. Gudrun Kugler, Member of the Austrian Parliament; Mr. Roger Kiska, Former Senior Counsel and Deputy Director of Alliance Defending Freedom International; Mr. Joshua McCaig, CEO/President of the National Lawyers Association; and Ms. Kirsten Evans, Executive Director of In Defense of Christians. Evans addressed the crowd in two separate lectures followed by a round table discussion, in which she spoke on the historical context of the rise of Christian persecution in the Middle East, the present circumstances of Christian communities throughout the Middle East, and the political battle to get the genocide of Christians, Yezidis, and other religious minorities in the Middle East recognized by the United States government. Podcast versions of these lectures will be made available shortly. 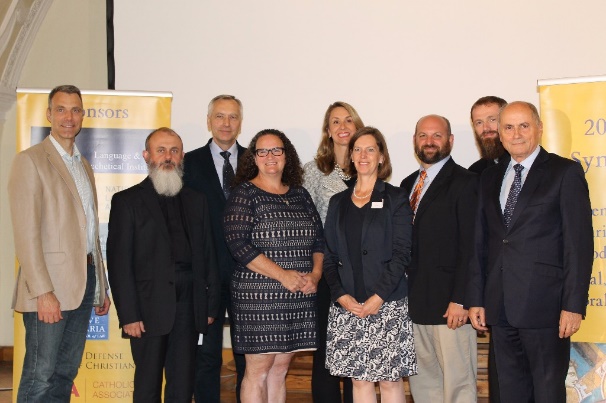 Group of ICLC lecturers and guests, including Mr. Jan Figel, European Union Special Envoy on Freedom of Religion or Belief Outside the EU (back row, left-hand side); Dr. Jan Carnogursky, Former Prime Minister of Slovakia (front row, far right); Mr. Joshua McCaig, CEO/President of the National Lawyers Association (front row, second to the right); the current Catholic bishop of the Ukraine (front row, second to the left); and Ms. Kirsten Evans, Executive Director of In Defense of Christians (back row, center). 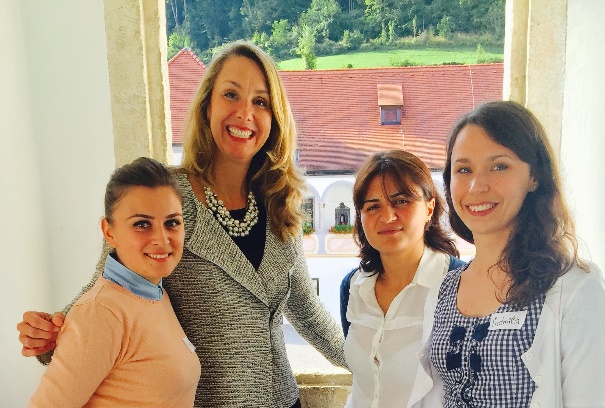 On October 24, a meeting of the Wichita Chapter of IDC was held at St. George Cathedral attended by close to 35 members. Fr. Paul O’Callaghan opened the meeting with prayer, and Chair Nassim Nabbout welcomed the membership and led the agenda. Vice-Chair George Saghbene and member Tom Brown reported on the IDC National Advocacy Convention they attended last September in Washington, D.C. Both gave glowing testimonies to their experiences there and the work being done on behalf of persecuted Christians. Fr. Paul O’Callaghan reported on the Wichita screening of “Our Last Stand” which was attended by over 200 people, as well as the meetings he attended in support of the chapters being formed in Oklahoma City and Kansas. Projects of future screenings of ‘Our Last Stand’ and lobbying efforts by Wichita members were also in discussion, as well new members enrolling to the chapter. 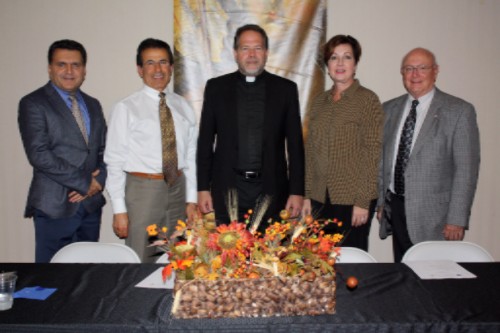 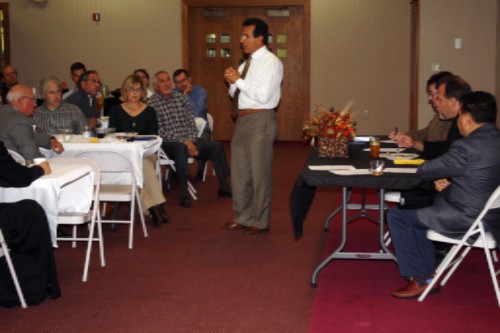 On October 17, the IDC Houston chapter was launched, led by Toufic Nassif and Philip Nassif, who organized an town hall meeting at the St George Christian Orthodox Church Houston, in Texas. Around 45 attendees — from across the greater-Houston area — were present to learn more about IDC, its mission, and how they can help raise awareness and advocate for Christians in the Middle East. 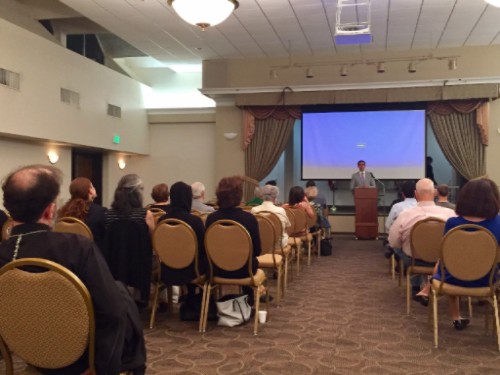 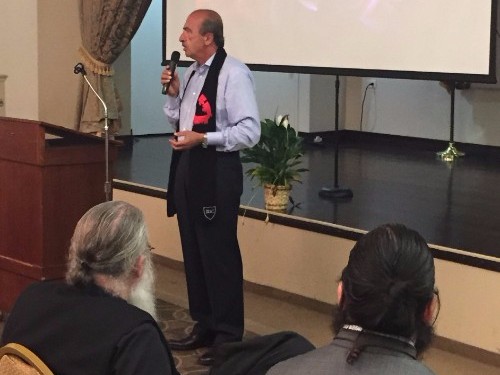 On October 18, the Young Catholic Professionals of Arizona organised an event featuring guest speaker Ron Johnson of the Arizona Catholic Conference. Members of the IDC Arizona chapter attended this event as a partner organization and met with dozens of young Catholic professionals, spoke with them about IDC’s advocacy agenda and what they could do to help, and signed up new members. 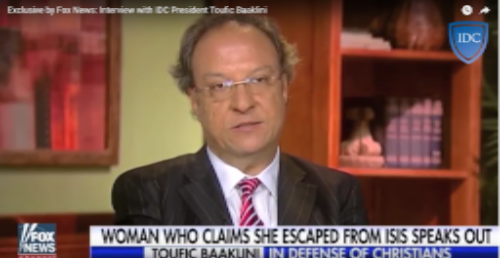 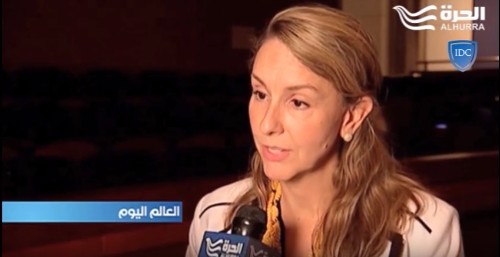 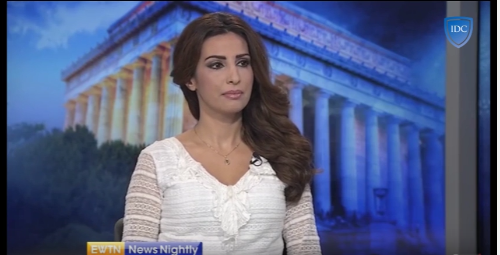 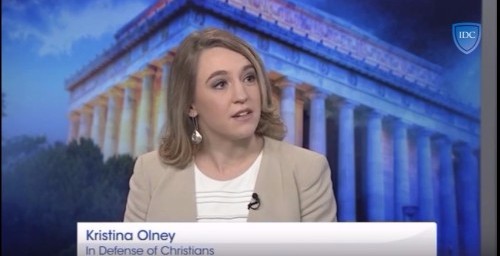 Interview with IDC Director of Media and Communications Ninar Keyrouz on the Syrian Refugee Crisis in Lebanon.

Keyrouz to EWTN Chief White House Correspondent and Political Director Lauren Ashburn: “I always like to describe Lebanon as a missing link, because of the sad reason that it’s gotten forgotten by western media, by all governments and politicians. That’s why it’s missing. And it’s an important piece because of its strategic location, it borders the Eastern Mediterranean.”

. Evans: “We will discuss with the U.S. Congress working with Iraq and the government of Kurdistan on creating a Nineveh Plain Province for Christians and other minorities in Iraq.”

Evans to EWTN Chief White House Correspondent and Political Director Lauren Ashburn: ” This year’s convention has a theme “beyond genocide”, it has three main focuses. the first is a message of hope for these communities that there is life beyond this attempted genocide. The second is a call to action to international leaders to fulfill their legal and moral commitment to protect and preserve this communities. The third is to look at the challenges Christians face in the broader region, beyond Iraq and Syria. ” The report also focuses on IDC’s Congressional briefing where more than 30 Members spoke, as well as IDC’s Ecumenical Prayer Service.


Interview with IDC Director of Government Relations Kristina Olney on the Nineveh Province and the Syrian Refugee Crisis.

Olney to EWTN Brian Patrick: “The impending operation to liberate Mosul from ISIS is important because for the fist time Christians have hope that they will be able to return home.”

. The report focuses on how the film helps raising awareness in the U.S. about the Christian plight in the Middle East and with the help of IDC national chapters. Keyrouz to Stella Grigoryan: “We realized that through the screenings we’re holding and the fact that after screening the film, you do a Q&A, people are asking what can we do. And so the film is also telling the people indirectly that you can do something.”

The report focuses on IDC Advisory Board members Neemat Frem, Professor Alexis Moukarzel, discussing solutions to the Lebanese political and Syrian refugee crisis, as well as an interview with IDC Director of Media and Communications Ninar Keyrouz on ‘Our Last Stand’ DC Premiere at the Heritage Foundation.

IDC president Toufic Baaklini  to the Washington Examiner: “We are advised by displaced Christians living in camps in Erbil [Kurdistan], who want to stay in Iraq, they want to fight, and their force is getting larger and larger.”


6 Challenges for Iraq’s Religious Minorities in a liberated Mosul

IDC Director of Government Relations Kristina Olney to the Conservative Review: “While the task is complex, and even daunting- the situation presented “an historic opportunity for displaced communities to be resettled and for communities to establish local governance and provide for their own defense within the existing political frameworks.”

IDC Director of Government Relations Kristina Olney to the Christian Post: “Sectarian violence has divided Iraq along ethno-sectarian lines. Those who are returning home will need time to build trust with their neighbors and be assured of security,” Olney said in an emailed statement to CP. “On a broader level, many members of minorities feel betrayed by the larger ethnic or sectarian blocs in the country who they consider failed to protect them.”


The reality of Christian Genocide in the Middle East

IDC Director of Government Relations Kristina Olney to Alateia: In the words of Olney, “We are asking Americans to bring the next wave of advocacy and awareness to the halls of Congress, to the executive branch, and to decision makers around the world.”


After Mosul’s liberation, genocide victims have right to return home.

Evans to Son Rise Radio “Following the United State government’s declaration that it believes Christians and other religious minorities in the Middle East are victims of an ongoing genocide by ISIS, we have a moral imperative and a legal responsibility to craft carefully and thoroughly an American foreign policy that puts the needs, the rights, and the future of these communities in first place.”


Interview with IDC Director of Media and Communications Ninar Keyrouz on IDC Advocacy Agenda and the situation of Christians in the Middle East.

Keyrouz to WJLY General Manager Dick Wheeler: “The issue of the plight of the Christians has been on the rise because of ISIS, but their persecution goes way back longer.” Please support IDC with a tax-deductible donation. Your generous support makes the work of IDC possible.