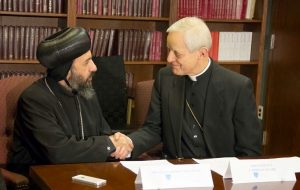 On February 20, 2015, IDC gathered religious leaders and government officials around a table to discuss the impact of and response to the tragic murder of 21 Coptic Christians in Libya by ISIS.

Cardinal Wuerl opened the event with a pledge of solidarity from the Catholic community to their Coptic brothers and sisters. “If one person is killed because of his or her faith,” the Cardinal said, “all of us suffer. I am here to say to Bishop Angaelos, ‘We are raising our voice with you.’”

Highlighting the radical Christian response of forgiveness, the Bishop continued, “We cannot let these acts change our hearts, we cannot hate, because that would be the ultimate defeat.”

Both prelates called for prayer for the murdered Copts and their families, as well as for the ISIS militants responsible for the murders. 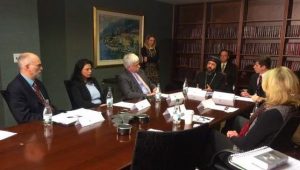 Joining Dr. Lantos Swett for the roundtable were Ambassador Jackie Wolcott, USCIRF Executive Director; Warren Cofsky of the State Department’s Office of International Religious Freedom; Professor Robert Destro, Director of the Interdisciplinary Program in Law & Religion at The Catholic University of America’s Columbus School of Law; and Nermien Riad, founder of Coptic Orphans, among others. Destro and Riad sit on IDC’s Board of Advisors.

Dr. Lantos Swett exhorted her colleagues and the press, “It is important that we see and acknowledge the magnitude of the threat that is increasing in this part of the world. It is critically important that our government stand up for the broad concept of religious freedom. It is in our national security interest.”

IDC launches the pilot project of its charitable arm by delivering over $100,000 worth of aid, in the form of food, bedding, and toys, to displaced Christian refugees in Lebanon. 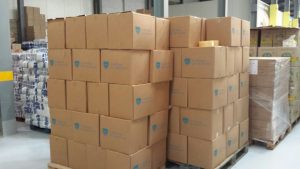 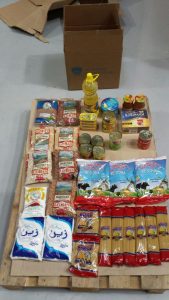 News on IDC’s sponsored two-day visit of His Grace Bishop Angaelos to the United States Congress and the National Press Club, March 17-18, 2015. 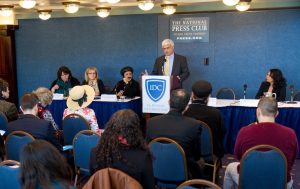 “The West has proved incapable of presenting desirable alternatives to the extremism offered by Islamist militants. Put simply, few in the West’s public life have demonstrated a competence—or even a serious desire—to engage believers. This is a painful irony for many Americans in light of the fact that religious freedom is a concept deeply rooted in America’s history and traditions. (Even the least religious among America’s founders, Thomas Jefferson, believed religious liberty to be foremost among the Enlightenment era’s achievements.) However, this tradition has been challenged—and largely bested—by an intensely secularized public culture, hostile in particular to Christianity, the dominant faith of the West. Many leaders and intellectuals simply do not hold the right to religious freedom in terribly high esteem. Competing and conflicting values have emerged, and these take greater precedence, even in the conduct of US foreign policy.”

IDC’s “Day of Action” campaign is featured in Foreign Policy article “The Real War on Christianity.”

“Many Christians and Christian organizations are politically active on domestic issues like abortion and same-sex marriage. But international issues are “more intimidating to people,” Faith McDonnell, the director of Religious Liberty Programs at the Washington-based Institute of Religion and Democracy, said in an interview. She added that many Christians and other Americans concerned about the plight of Middle Eastern Christians “don’t even know who is on the Foreign Relations Committee.”…

Some Christian leaders are trying to change that. On Feb. 25, In Defense of Christians (IDC), a Washington-based advocacy organization, sponsored a “Day of Action,” calling on American Christians to contact the White House to press for the special envoy to be finally appointed and to contact their congressional representatives to ask that they join the Caucus for Religious Minorities in the Middle East. ”

“Syrian and Iraqi Christians pleaded for more international assistance Tuesday from new homes in Lebanon where they recently arrived after fleeing attack by militants from the Islamic State group.

They spoke in two Beirut churches where they lined up to receive food baskets and other humanitarian assistance from a non-profit organization called In Defense of Christians (IDC), whose mission is to protect Christians in the Middle East.” – The Washington Post, March 17

IDC is pleased to welcome our new Executive Director, Kirsten Evans, to our growing staff

Kirsten holds a Master’s degree in International Public Policy from the Johns Hopkins School of Advanced International Studies (SAIS), where she concentrated in international development and the role of religion in global politics. She also holds a specialization in International Human Rights Law from the University of Oxford, UK, and a Master’s degree in Religious Sciences from the Regina Apostolorum Pontifical University in Rome, Italy. She brings diverse professional experience to the team, including international education and nonprofit leadership. Most recently, Kirsten spent three years serving the United States Conference of Catholic Bishops in its on-going relationship with the Muslim, Jewish, and Orthodox Christian communities in the U.S.

Kirsten will be implementing IDC’s strategic vision, building the institutional foundations for a successful organization, and managing daily operations. She is deeply committed to the mission and vision of IDC and thrilled about the opportunity to work with such a talented and energetic staff, meeting the needs to our rich and diverse Diaspora constituency around the country.