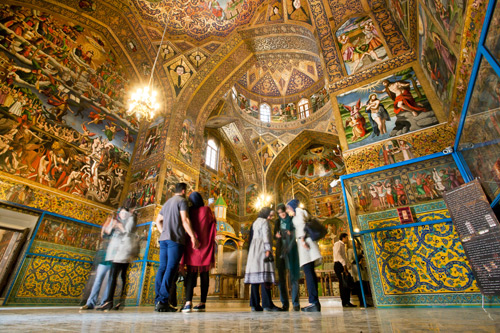 Iran’s Constitution permits Zoroastrians, Jews, and Christians protection to worship freely and to form religious societies, though proselytizing is strictly prohibited. Five parliamentarian seats are reserved for these groups. However, Iran does not recognize the Baha’is as a protected religious minority, and the government discriminates against its citizens on the basis of religion or belief, as all laws and regulations are based on unique Shi’a Islamic criteria.

Since Iran’s 1979 revolution, many members of minority religious communities have fled in fear of persecution. Although Christians are allowed to practice their faith, they face arduous government regulations and harassment, which includes the monitoring of all Christian religious practice. Christians who attend liturgy are required to register with the authorities. These same authorities reportedly forbid Muslim converts to Christianity from entering Armenian or Assyrian churches.

The Baha’i community, the largest non-Muslim religious minority in Iran, has long been subject to particularly severe religious freedom violations. The government views Baha’is as heretics, and consequently they face repression on the grounds of apostasy. Since 1979, authorities have killed or executed more than 200 Baha’i leaders, and more than 10,000 have been dismissed from government and university jobs.

Christians in Iran, the majority who are ethnic Armenians living in Tehran and Isfahan, have also faced discrimination and harassment. Iranian authorities have raided church services, threatened church members, and arbitrarily arrested hundreds of Christians throughout the country.

ASK YOUR REPRESENTATIVE TO: