In the member states of the Gulf Cooperation Council (GCC)- Bahrain, Kuwait, Oman, Qatar, Saudi Arabia, and the United Arab Emirates- migrant workers compose the majority of the population and construction, retail, industry, and domestic work sectors.  GCC relies heavily on millions of workers from India, Bangladesh, Pakistan, Nepal, and the Philippines who are critical to its successful economic development.   As migrant workers generally occupy the most physically intensive industries, they are systematically abused, exploited, marginalized, and silenced through threats of deportation and unemployment.

Although each nation of the GCC individually conducts its own labor laws, the pattern of forced labor and human trafficking is prevalent.  Although local and international human rights organizations have reported on the abuse of migrant workers, these populations are highly vulnerable due to lacking or unenforced rights’ protections, likened to modern day slavery.

The residency of migrant workers is monitored under the Kafala (sponsorship) system.  Under this system, workers are individually assigned and nearly entirely controlled to an employer.  Workers are often recruited by fraud and deception, becoming susceptible to sexual, physical and psychological abuse by employers.  Reports also include confiscation of passports, restrictions on mobility, excessive work hours, delayed salary payments, and subpar working and living conditions.

Migrant workers are reportedly often deported for minor transgressions, such as traffic violations, barbecuing in public spaces, or complaining about working conditions.  Upon arrest, workers may be jailed and deported, without inability to appeal.  While legal remedies exist, language and mobility barriers often limit accessibility.

The Gulf is home to a secluded population of indigenous Christian communities with large populations of expatriate migrant laborers from around the world.  In most countries, expatriates have freedom of worship but are not allowed to evangelize. In Saudi Arabia, public expressions of non-Muslim religion as well as private religious gatherings are forbidden.

When the oil boom of the 1970s ushered in a wave of development, the ranks of expatriate workers swelled to meet the region’s demand for labor.  Today, the Gulf’s expatriate community reaches over 15 million people. Of those, more than 3.5 million are Christians, two-thirds of whom live in Saudi Arabia. 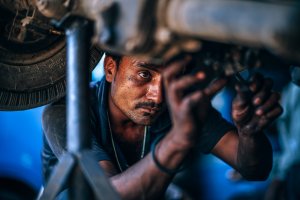 Although the Saudi government only allows public practice of Islam, the government has stated repeatedly that non-Muslims may practice their religion privately without harassment.  However, this stated acceptance has not has not been pursued or codified.  In recent years, members of the Committee for the Promotion of Virtue and the Prevention of Vice (CPVPV) have raided private religious gatherings, with following arrests or deportation of participants.  Although the number of raids has decreased since 2015, non-Muslims seeking religious practice remain in constant fear, especially outside of compounds populated largely by foreign workers.  In February 2017, the U.S. Commission on International Religious Freedom (USCIRF) found that many non-Muslim religious communities residing in the GCC restrict their services and activities to avoid notice of neighbors or authorities.

Recommendations for the U.S. Government: