As NATO member and supposed U.S. ally Turkey takes an increasingly undemocratic turn domestically, its foreign policy in the Middle East has been increasingly destabilizing. The effects of this foreign policy have been felt across the Middle East, Europe and especially by persecuted religious minorities in the region. President Erdogan is quickly transforming into an authoritarian leader, taking advantage of Turkey’s transition from a parliamentary model to an executive presidency to remain in power and allocating more powers to the presidency. If this trajectory holds, Turkey is posed for an internal decay and further external destabilization, to the detriment of the Turkish people and endangered minorities in the region. 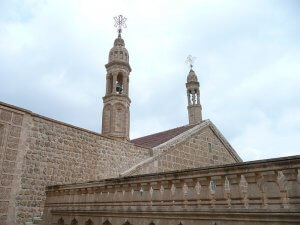 Mor Gabriel Monastary located near the town of Midyat in the Mardin Province in southeastern Turkey (Source: Wikimedia Commons)

Today, Turkey’s diverse Christian communities number at an estimated 107,000. Many of Turkey’s current problems stem from an unhealthy Turkish hyper-nationalism that was built upon the oppression of minorities. The Ottoman Empire’s Christian population suffered several pogroms in the lead up to the founding of the Turkish Republic, from the Batak Massacre, the Hamidian massacres, the Adana massacre and the 1915 genocide of around 2 million Armenian, Assyrian, Syriac, Chaldean, and Pontic Greek populations. And after the founding of the Republic, thousands of Kurds and Alevis were killed in the Zilan massacre and in the aftermath of the Dersim rebellion.

Not only has Turkey refused to acknowledge or apologize for these massacres, but Article 301 of the penal code, on “insulting Turkishness,” has been used to prosecute people who highlight the massacres. In Turkey, public debates on these issues have been stifled. In fact, the state often backs efforts to punish and harass people who publicly acknowledge or discuss this history. In 2006, the well-known Armenian-Turkish journalist Hrant Dink was prosecuted under the Article 301 for insulting Turkishness, and received a six-month suspended sentence. He was subsequently assassinated by a radical nationalist and it later emerged that security forces had been aware of a plot to kill Dink but failed to act. Turkey takes extreme measures to silence discussions of these crimes abroad, such as threatening to sever diplomatic relations and threatening to cancel crucial security cooperation.

For Christians, the legacy of the genocide has endured because the lands, churches, and other properties stolen during episodes of ethnic cleansing and genocide have not been returned and reparations have not been paid to the victims. For instance, in the historically Syriac Orthodox area of Mardin city in Southeast of Turkey, the government has seized more than 100 properties (churches, monasteries, cemeteries, and lands) with title deeds. In particular, the battle over the status of Dayro d-Mor Gabriel (The Monastery of St. Gabriel) is troubling because of its importance to the Syriac community. Although there is a proposed law pending in the Parliament which would give back around 56 title deeds back, others will remain with the Treasury department. When this issue was raised by Syriac activists based in Europe in meetings with Turkish officials, officials complained about activism among Turkey’s Christian diaspora in Europe, including their advocacy for recognition of the 1915 genocide. The implication was that religious lands would be returned only if activists remained silent on these issues. Moreover, transferring ownership of some of the Syriac properties to Turkey’s Directorate of Religious Affairs means they will be treated as Islamic endowments, making their future even more uncertain.

Syriac Christians have only a tiny presence in southeast Turkey since most of them have left for Europe because of persecution. The few that have remained are often caught up in Turkey’s conflict with the PKK, which leaves them feeling insecure. In other parts of the country, they face regular and often unpunished hate-speech. Armenians have not been able to elect a new Patriarch due to state interference, and the Syriac community’s efforts to build a new church and elementary school in Istanbul to teach their native language and culture have been rejected by the government.

There is deep-seated hostility between the Turkish state and the country’s Sunni Kurds, who constitute around 20% of the population. Kurds received harsh treatment at the hands of the Turkish authorities for generations: many were forcefully resettled, Kurdish names and costumes were banned, the use of the Kurdish language was restricted, and even the existence of a Kurdish ethnic identity was denied. After a bloody war with a Kurdish separatist group starting in the 1970s in which more than 40,000 people died, Turkey agreed to a ceasefire after secret talks were held and allowed for greater acceptance of Kurdish rights. However, in 2015 after a suicide bombing blamed on Islamic State killed 33 young activists in the mainly Kurdish town of Suruc, near the Syrian border, tensions flared and peace talks broke down. Since then, Turkey has clamped down on Kurdish rights and been unwilling to reengage in peace talks. When the pro-minority, left-wing Peoples’ Democratic Party (HDP) did well in elections in 2015, President Erdogan re-held elections and was accused of manipulating votes to ensure the HDP did not do as well.

Another persecuted minority in Turkey is the Alevi religious community. At 25 million people, including a mix of Arabs, Turkmen, and Kurds, Alevis represent around 20% of the country’s population. The Alevis are part of a Shia subculture and have endured centuries of persecution and being branded as heretics. Amid Turkey’s increasing Islamization, Alevis remain second-class citizens. Aside from massacres in the early years of the Republic, dozens of Alevis were murdered during upheaval in the 1970s and many Alevis were regularly attacked by Islamist mobs and burned alive. In 2015, vandals marked Alevi homes, rousing fears that a surge in nationalism would stoke tensions. The marking of Alevi homes is an ominous trend that harks back to the 1978 massacre of Alevis, when similar red X’s appeared on Alevi homes. Alevis long to see their places of worship – cemevis – recognized as such by the state and seek a state curriculum that includes lessons on their faith to combat negative distortions.

Turkey’s wide-ranging crackdown since the attempted July 2016 coup has seriously alarmed rights groups and observers. The subsequent crackdown has seen around 65,000 people arrested and another 152,000 dismissed from their jobs by government decrees, including state officials, teachers, bureaucrats, and academics. Figures are outstandingly high, with over 3,000 schools, dormitories and universities shut down, 5,822 academics losing their jobs, 4,463 judges and prosecutors dismissed, 189 media outlets shut down and 319 journalists arrested by government decrees. Detainees recall being denied food, water, and medical treatment in addition to physical torture.

Freedom of speech has been severely curtailed, with harassment and forced co-optation now the norm for any newspaper, TV station, or blogger that criticizes the government or President Erdogan. The government has brutalized and arrested members of opposition parties, most notably the HDP, whose head Selahattin Demirtash was arrested for outrageous claims of supporting a terrorist organization. Currently, U.S. Pastor Andrew Brunson has been imprisoned since October 2016 and is being held hostage to extract political concessions from the United States. Turkey accuses him of supporting the Gulen movement, which allegedly staged the failed coup in July 2016, but he has not been formally charged. In September 2017, President Erdogan suggested that Turkey would release Pastor Brunson if the United States would hand over Fethullah Gulen, the Muslim cleric living in Pennsylvania that heads the Gulenist movement. Moreover, last year Turkey detained an employee of the U.S. Consulate in Istanbul on unfounded terrorism charges. Combined with Turkey’s potential purchase of Russian S-400 missiles and increased anti-American rhetoric pumped out by Turkish leaders, including by President Erdogan, which include threats to attack areas in northern Syria where US special operations forces are deployed, the U.S. should be deeply concerned about our ally’s increasing hostile stance towards us.

While Turkey is a destabilizing force at the international level, on the regional stage it is the single most destructive state actor. Turkey is on the record giving free passage to foreign fighters, supplying and equipping ISIS and Al-Qaeda, issuing visa waivers (or issuing visas on demand) for citizens of countries that contribute to ISIS, buying ISIS oil, facilitating and fighting with Islamist militias in Syria, turning a blind eye to government and individual support of terrorist organizations, and distracting from the U.S.-led fight against ISIS. Turkey is an enabler of the Islamic State, Al-Qaeda, and other terrorist groups and should be condemned as such. U.S. officials should demand that Turkey immediately cease its support for these groups.

Turkey’s recent “Olive Branch” operation in the YPG-controlled Afrin region in Syria has been exceptionally precarious for religious minorities. In particular, Christians and Yazidis have expressed concerns over the participation of Turkish-backed Syrian Islamic militants who have been threatening religious minorities and targeting civilian areas. The Afrin canton served as a safe zone for refugees of the war, and around 15,000 Yazidis and 250 Christian families lived there in relative safety from the Assad regime, ISIS, and other extremist organizations. The current military operation and instability in the area put the lives of minorities remaining there at a great risk, portending even more dire consequences for minorities throughout Syria. Several have already been killed, and shrines and religious sites have been destroyed or forcibly converted into mosques. People’s homes have been looted and minorities are being shamed by extremist militias. Like in Iraq in 2014, the situation foreshadows ethnic cleansing and genocide.