These “Islamic superpowers,” bitterly divided over Iran’s Shia and Saudi Arabia’s Sunni identities, are each theocratic states that severely repress their minority Christian communities. To offer one example, in December 2012, Iranian government forces invaded a Christian home and seized four Christians, who were sentenced to eighty lashes for the crimes of drinking communion wine and possessing a satellite antenna.

Christians in Iran number between 240,000 and 370,000 in a population of about 77 million; their ranks are growing and include members both of churches whose roots in Persia date back to the earliest days of Christianity, as well as churches that have arrived far more recently, especially evangelical and Pentecostal ones. In Saudi Arabia, the vast majority of Christians are expatriate laborers from South and East Asia; they number around 3.5 million in a population of about 29 million. 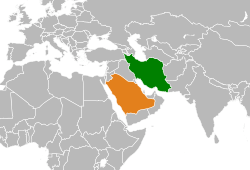 The governments of both countries treat Christians as second-class citizens, allowing them to worship only behind closed doors and barring them from virtually all public expressions of their faith, most of all anything resembling proselytism. Christians live in constant danger of harassment, arrest, and harsh imprisonment. In Saudi Arabia, Christians are not allowed to build churches. In 2014 alone, Iran arrested about 500 Christians. Evangelicals, whom the regime charges with being illegally registered and with proselytism, are especially subject to repression. The government has formally banned the use of Farsi in Christian gatherings, while permitting Assyrian or Armenian language worship services. In both countries, Christians face heavy discrimination in employment and other spheres. In both, they are harassed and attacked by paramilitary organizations that are only loosely controlled by the government.

In these conditions, Christian responses are overwhelmingly ones of survival, mostly aimed at avoiding the attention of the authorities.

They avoid criticizing the government, complaining about restrictions, expressing ill will toward their opponents, or saying anything indicating a connection with Western powers or interests, for both governments regularly depict Christianity as being a foreign, Western faith. They avoid worshipping in the languages of the dominant Muslim population—Farsi in Iran, Arabic in Saudi Arabia. Some Christians have emigrated from the country, often with the approval of the government, and relocated elsewhere. Their numbers are not known, but in 2012 Germany granted asylum to 4,384 Iranians, many of whom were Christians.

This outline on Iran and Saudi Arabia is part of a larger report on Christian persecution, created by the University of Notre Dame, as part of their “Under Caesar’s Sword” project.

You can read the entire report here: http://ucs.nd.edu/report/