Yazidis are an ancient ethno-religious group who live mostly in Northern Iraq, with smaller communities found in Syria and Turkey and a growing diaspora in the West. Yazidis currently number at around 700,000 people. A historically misunderstood group, the Yazidis have faced centuries of oppression and threatened extermination because of misunderstandings surrounding their faith.

Yazidism is a monotheistic faith that is based on the teachings of a 12th-century mystic, Sheikh Adi. A largely orally transmitted religions, Yazidis believe that God entrusted Seven Angels to the care of the world, preeminent of which is Malak Tawwus, the Peacock Angel. The valley of Lalish in northern Iraq, where Sheikh Adi is buried, is the holy center for Yazidis and each Yazidi must make a pilgrimage to Lalish in his or her lifetime. But one of the largest concentrations of Yazidis is found not in Lalish, but on top of the Sinjar Mountain and an adjacent town. 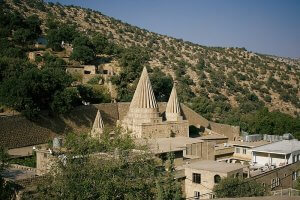 Under Ottoman rule in the 18th and 19th centuries alone, the Yazidis were subject to 72 genocidal massacres and in 2007, nearly a thousand Yazidis were killed by a series of car bombs in their stronghold in northern Iraq in one of the single deadliest events in post-2003 Iraqi history. The Yazidis have been denounced as infidels by Al-Qaida in Iraq and ISIS who sanctioned their indiscriminate killing.

These Yazidis were easy targets for the Islamic State, which swept into Northern Iraq in the summer of 2014. The lack of a native defensive militia or police force – as well as strained relations with Kurdish and Arab neighbors – left the Yazidis unprepared for one of the worst genocides the group has faced in its entire existence. Thousands were slaughtered or displaced, while women were taken in as sex slaves and young children were brainwashed to become fighters, prompting the Obama Administration to take military action against ISIS. Authorities in the semi-autonomous Kurdish region have counted 6,417 Yazidis kidnapped by ISIS since August 2014; in 2017, less than half have been freed or escaped, and 3,210 are still captive or missing. In March of 2016, both the the U.S. House of Representatives and Secretary of State John Kerry found that ISIS was responsible for genocide against Yazidis, Christians, and Shia Muslims.