On May 16, IDC hosted a Congressional Briefing on the current state of religious freedom and human rights in Turkey, in partnership with the Senate Human Rights Caucus, Freedom House, and Amnesty International. The briefing had a standing room turnout and helped motivate the Senate to take the positive action of freezing the sale of 100 fighter jets to Turkey.

On May 17, following a two week hacking build up by Turkey or Turkish affiliates on IDC staff’s personal social media accounts, Turkey or its affiliates took down IDC’s website for the entire day, making sure IDC’s identity is well revealed as they left the Turkish flag on IDC’s website and played Turkish Patriotic music. In addition to the website, the hackers more aggressively targeted IDC’s staff work emails and their personal social media accounts. Unsurprised by this cowardly act, the next day IDC held a press conference on May 18 with partner organizations to state that we were not intimidated by this sort of intimidation tactic. More on this hack and our press conference can be watched here through this EWTN News Nightly. 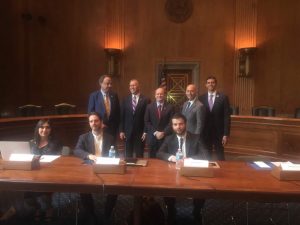 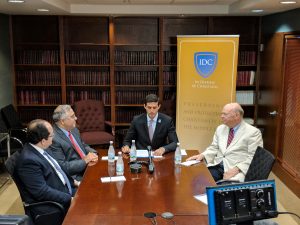 On May 10, Chairwoman Iliana Ros-Lehtinen (R-FL) received the 2018 IDC Congressional Champions Award for her work on the Syria Accountability and Lebanese Sovereignty Restoration Act which passed U.S. Congress in 2003 and was signed by George W. Bush, as well as her more recent work on H.R. 674 which calls on Egypt to improve treatment of Coptic Christians. She has been a tireless advocate for persecuted Christians during her time serving as the Middle East and North Africa Subcommittee Chairwoman. 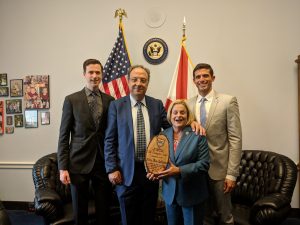 On May 10 as well, IDC presented Congressman Brad Sherman with the 2018 IDC Congressional Champion Award for his constant support of oppressed minority communities in the Middle East. He has fought for Armenian Genocide Recognition, Iraq and Syria Genocide relief, the rights of Egyptian Christians, and the safety and stability of Lebanon. 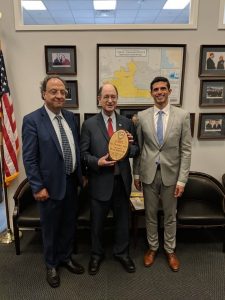 Above from left to right: IDC President and Chairman of the Board Toufic Baaklini, Congressman Brad Sherman and IDC Executive Director Philippe Nassif.

On May 29, IDC’s San Antonio Chapter met with Congressman Joaquin Castro while he was back visiting his home district. Congressman Castro agreed to co-sponsor House Resolution 673, which commits the U.S. to increase accountability on the Egyptian government for their treatment of Coptic Christians, and his support for Lebanon. He also expressed enthusiasm at growing his relationship with San Antonio’s Middle Eastern community. 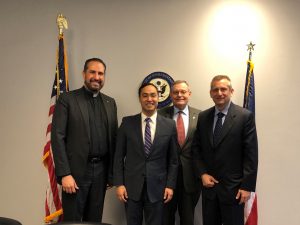 Don’t count Lebanon’s election as a victory for Hezbollah, an Op-Ed by IDC President and Chairman of the Board Toufic Baaklini.

IDC was honored this past month to announce that our President and Chairman of the Board Toufic Baaklini received an honorary doctorate from the Catholic University of America on May 12, 2018 for his leadership of In Defense of Christians. In receiving this honor, Mr. Baaklini joins a list of recipients including U.S. Presidents Franklin Roosevelt and Dwight Eisenhower and Saints Katherine Drexel and Mother Theresa of Calcutta. He is also only the third Lebanese to receive this honor after Charles Malik and Nasrallah Peter Cardinal Sfeir. Upon bestowing Mr. Baaklini with the degree of Doctor of Laws, honoris causa, John Garvey, President of The Catholic University of America remarked that:

Baaklini’s efforts to prevent the obliteration of Christianity from its birthplace have been unstinting. He has traveled many times to the Middle East, Africa, and other parts of the world torn by religious strife. In 2016, at a conference cosponsored by the Holy See, he addressed the United Nations on genocide, imploring his hearers to pay attention to what he described as “crimes that should rattle the conscience of all humanity. The entire citation by the Catholic University can be accessed here. 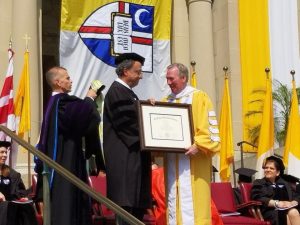