The Economist, October 27,
The politics of helping Middle Eastern Christians

The White House, October 25,
Remarks by the Vice President at In Defense of Christians Solidarity Dinner

The Atlantic, October 26,
Mike Pence Promises to Defend Christians in the Middle East

On November 29, IDC Special Assistant Yousif Kalian and National Outreach Associate Steven Howard caught up with Congressman Ro Khanna after his address with Foreign Policy for America, “Congressional War Powers and U.S. Involvement in the War in Yemen,” and thanked him for speaking at IDC’s 2017 Summit as well as supporting the Security and Stability of Lebanon by co-sponsoring House Resolution 252. The three also discussed further ways in which the U.S. government can protect religious diversity in the Middle East. 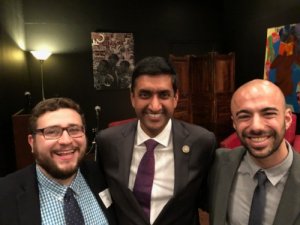 On November 28, IDC took part in the Chaldean Catholic Memorial Mass for Persecuted Christians hosted by Saint John Paul II National Shrine as a participation in the week of Awareness for Persecuted Christians which will take place from November 26 – December 2. Archbishop Warda of the Chaldean church in Erbil was present and voiced the concerns and needs of his community. 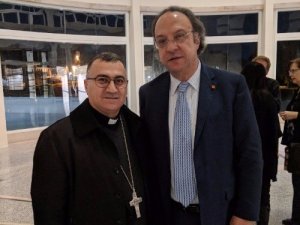 IDC President Toufic Baaklini and IDC staff stood in solidarity with persecuted Christians in Iraq and assured Archbishop Warda that IDC will continue its work to support Christians in religious minorities in Iraq and the Middle East. 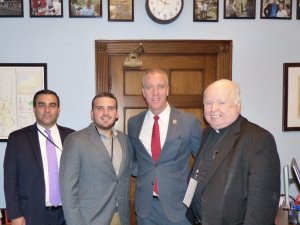 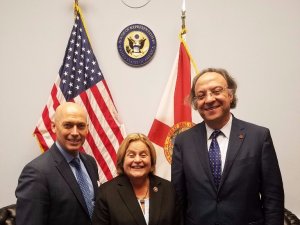 Right: IDC advocates met with Congressman Sean Maloney, Representative from New York’s 18th congressional district, during the 2017 IDC Summit.
IDC’s Government Relations team has been busy working with over seventy Congressional offices to gather support for House Resolution 252, which is focuses on the security and stability of Lebanon. We are excited to announce four new cosponsors: Rep. Khanna (CA-17), Rep. Trott (MI-11), Rep. Grothman (WI-6), and Rep. Moolenaar (MI-4), and we expect to include more in the coming days and weeks! 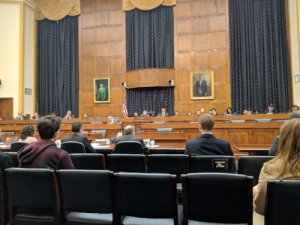 Above: November 29, IDC attended the House Foreign Affairs Subcommittee hearing on the Middle East and North Africa discussing the latest developments in Saudi Arabia and Lebanon.

We have also been busy meeting with Senate offices on both sides of the isle–including Sen. Portman, Sen. Brooker, Sen. Gardner, Sen. Kaine, and many others–to discuss the importance of passing H.R.390, which would direct relief to victims of ISIS’s genocide in Iraq and Syria and to inform them of the fears of Christians in Lebanon during this time of escalating tensions.

IDC Chapter Activities
On November 29, IDC Orange County Chair Dotty Hage presented at the Roman Catholic Diocese of Orange’s “Solidarity with Persecuted Christians Around the World” forum at Christ Cathedral. He spoke about his experiences growing up in Lebanon as well as about his advocacy as an IDC chapter leader. 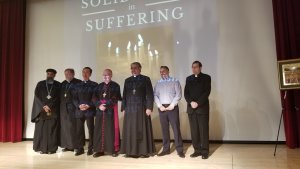 Make sure to keep up to date with the events section of our website to find out when we’ll be in your city!