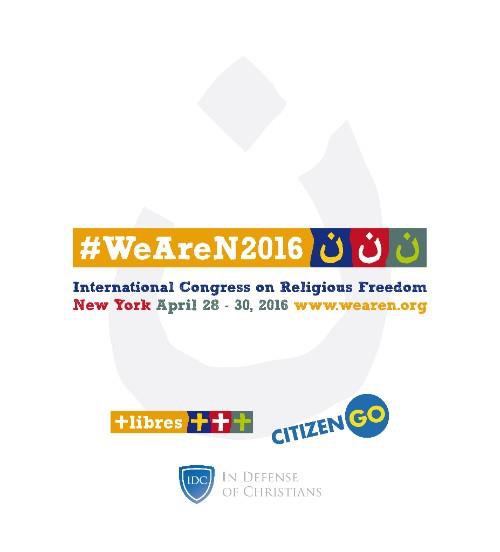 The “#WeAreN2016” Congress on ‘Defending religious freedom and other human rights: Stopping mass atrocities against Christians and other believers’ will bring together high level experts and witnesses to speak out and testify about persecution of Christians and other religious minorities in the world and call the international community to action to stop the massacre.

April 19, 2016 (Washington DC) – The International Congress #WeAreN2016 on Defending religious freedom and other human rights: Stopping mass atrocities against Christians and other believerswill be held in New York

on April 28-30. It will gather authorities, experts, and also victims of the atrocities and expulsion suffered by Christians and other religious minorities in Syria, Iraq, Pakistan, Nigeria and other countries. High-level dignitaries, bishops and missionaries, lay experts, witnesses and victims will have a voice in the United Nations and will present their testimonies in New York City.

It will begin on Thursday, April 28, with a panel discussion at the Economic and Social Council (ECOSOC) Chamber of the United Nations sponsored by the Permanent Observer Mission of the Holy See to the UN. Second and third sessions on April 29th and 30th will be held at The Roosevelt Hotel (NY). The program these days will include

the premiere of the documentary film Insha Alla: The Blood of the Martyrs, produced by CitizenGo and the final preparation of a petition calling on the international community to recognize the nature of the systematic attacks on Christians and other religious minorities and to commit itself to protect them in accordance with international law and previous United Nations resolutions.

The Congress is being organized by Citizen Go and Mas Libres and co-sponsored by the organization In Defense of Christians (IDC). Revenue obtained by the registration fees and donations from a ‘zero row’ will be entirely given to the witnesses from the Middle East speaking at the Congress.

All details about the program, speakers and registration form can be found at www.wearen.org. There are different tickets to attend the three days Congress as well as a special rate for families and code discounts. To access the event at ECOSOC in the United Nations headquarters it is mandatory to be previously registered by April 26.

To View the Program and Register for this Event, Please Click Here.

Your generous support makes the work of IDC possible.