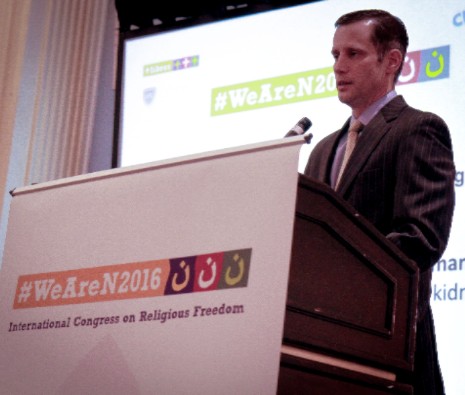 Ninar: Stephen, you have many years’ experience leading organizations in the public and private sector. And now you are joining IDC as Managing Director of the Haven Project. Welcome aboard!
Stephen: Thank you.

N: Tell us what a haven is. Who will live there, and who will control and secure this area?
S: A haven is a place where security fosters productivity. Genocide is not just about rape and murder — it is about eradicating a people from a place. In order to help restore the minority communities that lived on the Nineveh Plain before the ISIS genocide, we need to create security and a functioning economy.
While the haven will be open to immigrants, it is important that we begin by helping those displaced from there to return first. We believe in the rights to self determination, self defense and self governance. We expect a military coalition to liberate this area and train local forces to provide police protection so that people can return and begin to govern themselves and build an economy with the help of foreign direct investment. Once they do so, it will be up to those people to negotiate their future—whether it be as a separate province within Iraq, as a part of Kurdistan or as a completely independent entity if Iraq falls apart. IDC believes that it is not up to us, but up to those who choose to return to decide their future. Again, we support all peoples’ right to self determination. The most important thing in the short term is to secure the area, help people return and set up self-government and get the economy moving again so they can support their families.

To be clear, IDC is not asking for US boots on the ground — beyond trainers and advisors already in country — only U.S. air strikes and coordination to help local forces recover their communities. We expect Peshmerga allies to assist with external security in the fight against ISIS.

N: Some are requesting a Nineveh Plain Province, some are requesting a Safe Haven. Can you explain the difference?
S: These two concepts overlap significantly in practice and do not contradict each other. The former refers to making the Nineveh Plain (the small part of Nineveh Province northeast of the Tigris River) its own province under the Iraqi Constitution. Most calling for this option, including IDC, mean that it should have a form of special autonomy. Self governance is the key there. A safe haven is a security zone with protection from a coalition of international forces. IDC is calling for that, too, though we believe that internal security for such a zone should be performed by indigenous forces given international training and oversight.
IDC is happy with either solution—or both—provided that whatever the structure is, it is determined by those Assyrian, Chaldean, or Syriac Christians, Yezidis, Turkmen and others who return: Self determination is the key to political legitimacy.

N: How will the people become self sufficient and prosper?
S: Once they participate in liberating their own land and setting up self government, the Christians, Yezidis and Turkmen of the Nineveh Plain will have to work very hard. Our project is helping them to set up a regulatory structure and invite foreign direct investment that will bring capital, technology, and expertise to create jobs to help those returning from displacement to become self sufficient.

N: Why is it important for the U.S. to help the Christians there?
S: First as a matter of justice: Of course we did not intend to drive Christians out of Iraq, but that was an indirect result of our invasion of Iraq in 2003. The number of Christians in Iraq has fallen from about 1.6 million in 2003 to fewer than 250,000 today. Second, we have a compelling national security interest in a stable Middle East, and a robust pluralism with thriving Christian, Yezidi and Turkmen communities that will once again serve as a stabilizing factor. Third, we just cannot afford to bring all of them here. Fourth, and most important, those displaced by ISIS overwhelmingly would prefer to return home rather than emigrate, and as a matter of simple humanity as well as our own interest, we should help them do so.

N: Is IDC advocating the U.S. government to pursue policies, such as military intervention to  liberate of Mosul?
S: IDC favors the eradication of ISIS and all violent extremist groups. Since Mosul is the second capital of ISIS, IDC of course favors its liberation. However IDC believes that this should NOT be our top priority. Firstly, most of those displaced from Mosul DO NOT WISH TO RETURN, since their neighbors were the ones who turned them in to ISIS. Secondly, Mosul is the second largest city in Iraq. It will take longer to retake that than it took to retake Ramadi. We just don’t have time to wait. We must help the displaced NOW. Thirdly, ISIS has very few soldiers holding the Nineveh Plain. It would be relatively easy to retake this ground and then secure it. Some believe it could be taken in a single day, and there is some evidence to support that idea.
What IDC wants from the U.S. government is to train the local Christian and Yezidi forces to fight ISIS and police the haven, and provide air strikes and coordination with the Peshmerga to drive ISIS out.

N: How will you keep Mosul and the Haven safe?
S: I believe the local forces deserve the opportunity to secure their homeland, and that a no fly zone relying on U.S. air power, combined with U.S. training and equipping these local forces, is enough to keep the haven safe. Of course, it will be up to those local forces to prove that they want to hold their land more than anyone else wants to take it. Beyond military concerns, that means that they must work very hard to build a thriving economy — and make policy choices that create the conditions for foreign investment.

N: How can an average U.S. citizen help?
S: While many noble organizations are working to provide relief in the form of food, shelter, health care, etc., those are temporary solutions that do not heal the communities from the effects of genocide. IDC is asking people to do the following:

a) Learn about our Christian brethren displaced in Iraq, pray for them and encourage others to do so. IDC will soon be providing resources to help you advocate within your own community on behalf of these displaced Christians.
b) Give to the Haven Project to help us help them secure a haven and make it self-sufficient.
c) Work with IDC (this feature will be on our website soon) to mentor businesses in the haven in order to speed the creation of jobs for displaced families there.

N: Many thanks, Stephen, for speaking with us about the Nineveh Plain Province and Safe Haven projects as well as the way forward to actualizing these safe spaces.
S: My pleasure, Ninar.