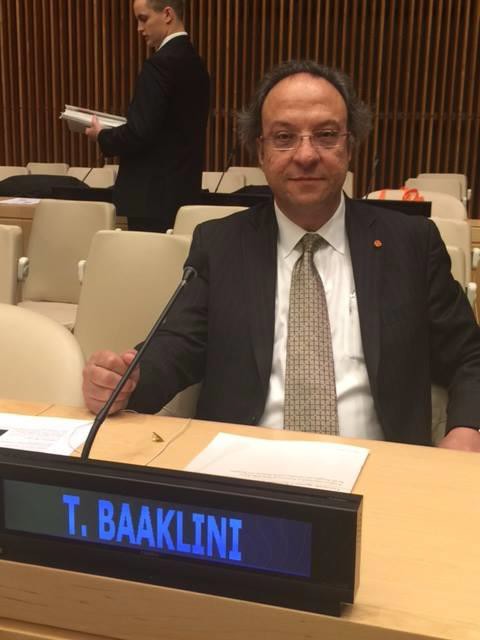 The following is Mr. Baaklini’s address: “On behalf the board of directors and advisors, the staff, and the membership of IDC, I want to thank you for the opportunity collaborate in this historic Congress. In a particular way I thank CitizenGo and the Holy See for organizing and co-sponsoring this important event, and inviting IDC to co-sponsor alongside you.

“I would like to thank all of the speakers of this week’s Congress for their testimonies of courage and hope.

“On Thursday we listened to the voices of living testimonies of genocide. Voices that, despite barriers of language and the distance of continents, resounded a unified message. Voices from Syria, Iraq, Africa, Europe and the United States, speaking the truth of crimes taking place in our world. Crimes that should rattle the conscience of all of humanity. Today we have another opportunity to listen, learn, and respond.

“Two weeks ago my staff and I had the privilege to travel to Lebanon and Iraq and visit with the diverse communities displaced by ISIS. We spoke with religious leaders and political leaders advocating on their behalf. All asked for the same things for the Christian communities struggling to survive: aid and protection. And they all spoke of the same hope: to one day go home.

“On one afternoon I spoke for over an hour with a young woman who that very day had arrived to Erbil from Bagdad after escaping from the ISIS sex-slave trade. With difficulty she opened her story to us, asking that we tell it to the world, but without using her name. After being beaten for three days she was held captive in an abandoned school, feed once a day, and made available for the daily abuses of her captors. She spoke of the suffering of the women she was with, from small children to women in their sixties, the abuses of the soldiers, their brutality, their lack of humanity. And her story, as we heard yesterday, is not unique. It is a story of far too many mothers, sisters, daughters, brother, parents and friends of so many Christians coming out of Iraq and Syria.

“Since 2014, IDC has worked to make the plight and suffering of these people known to the world and its leaders. In 2014 we launched a historic international Summit in which the major Patriarchs of the Middle East came to Washington, D.C. and met with President Obama to discuss the concerns of their communities. In 2015 our National Leadership Convention was the occasion for the introduction of US House Con. Resolution 75, or ‘the genocide resolution’. IDC members from around the country canvassed 287 congressional offices that week, and continue to contact their representative in the months following. With our advocacy and grassroots efforts, IDC members committed 203 members of Congress to co-sponsor the resolution before it was brought to the floor.

“Last month, in collaboration with the Knights of Columbus, IDC launched a national campaign titled ‘Stop The Christian Genocide’. We gathering 200,000 signatures in a few short weeks petitioning the State Department to recognize the genocide against Christians and other religious minorities under ISIS. Simultaneously, we submitted to the State Department and Congress a nearly 300-page historic document chronicling evidence of the genocide. Five days later the United States Congress voted to recognize the genocide with a historic unanimous vote. After continual engagement with Congressional leadership, three days later our friends in Congress pressured the Obama administration to follow suit. We had learned as late as the evening before that the administration was not committed to taking a stance of leadership on this issue, but by our continual collaboration with Congressional leadership, we changed their political direction. This was only the second time in American history that an ongoing genocide has been recognized while still occurring.

“IDC is now determined to hold our national leaders to this commitment. And we have chosen to be here this week, in collaboration with the Holy See and CitizenGo, to demonstrate our resolve to bring the entire international community to the recognition of this genocide, and to press a commitment of action toward the protection and preservation of Christianity in the Middle East.

“The consensus emerging among experts is that a safe haven, or protected zone, should be recognized for Christians, Yazidis, and other victims of genocide and crimes against humanity in the region of northeastern Nineveh Province known as the Nineveh Plain. This is the most effective and sustainable long-term solution

toward restoring these communities to justice and resettling these communities to their ancestral lands, where they lived together in pluralism and peace until ISIS’s genocide drove them out in 2014. A safe haven, or protected zone, would be established in cooperation and coordination with regional and national governments, the community of civilized nations, and the international community, all of which should contribute observers and facilitators to oversee the security, resettlement, and economic revitalization of these communities.

“We also hope for peace in Syria. But the absence of fair representation of Syria’s two million Christians at the current Geneva negotiations is cause for deep concern. Much hangs in the balance for religious minorities as the future of Syrian society and its new constitution are contemplated, included the 2000-year-old Christian community which has given so much heritage to the culturally rich nation. Christianity has been a positive agent of moderation, tolerance, and respect for human rights throughout Syrian history. It is vital that peace in Syria be one in which the survival and full participation of Christians in public life is guaranteed. Therefore, IDC implores the United States and the United Nations to ensure the full contribution, participation, and consideration of the Syrian Christians in its hopes for a negotiated peace.

“IDC looks forward to working increasingly with international partners toward the goals of relieving the immediate suffering of Iraq and Syria’s Christian communities while crafting long-term solutions, so that they may once again can live in peace, prosperity, harmony, and integration in their native homelands.

“Thank you again for your attendance at this event. And may God bless the work that you are doing for the protection and preservation of Christians and Christianity in the Middle East” 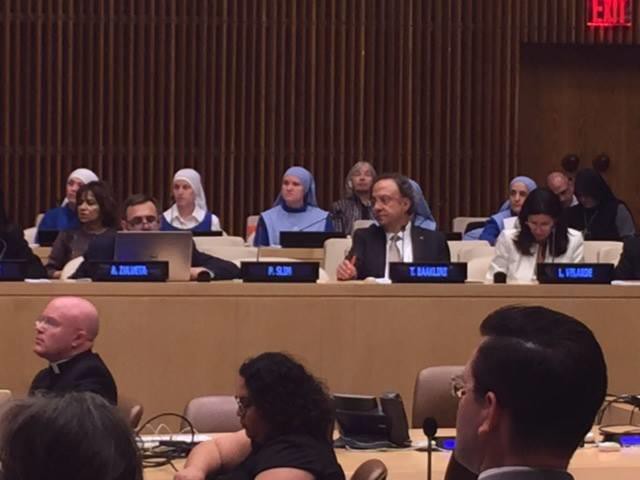 Your generous support makes the work of IDC possible.