In Defense of Christians and the Maronite Foundation in the World are releasing a co-authored case study titled “Displaced Syrians in Lebanon” focused on the impact of displaced Syrians on the delicate socio-economic situation in Lebanon.

The report challenges many of the existing narratives and some UNHCR statistics, including the number of Syrians in Lebanon and highlights the critical aspects to be addressed as we look for solutions for these most pressing issues the country faces.

Lebanon is the last safe haven for Christians in the Middle East, and IDC is proud of its partnership with the Maronite Foundation in the World.

The report will be presented to Government officials before the public press conference at the National Press Club. At the press conference, IDC President Toufic Baaklini and Maronite Foundation representatives will present the findings of the report and answer questions. 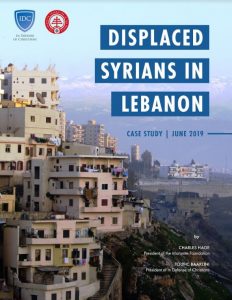