Today, hundreds of Lebanese Christians from across America and the Middle East will gather for the Northern Ohio Lebanese American Association’s 2014 Heritage Ball featuring IDC’s Honorary Chairman, Ambassador Gilbert Chagoury. The theme of the event will be “Protecting and Preserving Christianity, Where it All Began.”Ambassador Chagoury last spoke about the crisis facing Middle Eastern Christians at IDC’s historic September Summit in Washington, D.C. Find out more information here.

News From Around the World

Pope Francis condemned the “absurd violence” being used against Christians in several countries and called on people of good will everywhere to take up the cause of religious freedom. At the end of his general audience on November 12, Pope Francis asked the estimated 15,000 people in St Peter’s Square to join him in reciting the Lord’s Prayer for Christians facing persecution… Pope Francis urged a global “mobilisation of consciences” to protect persecuted Christians. “They have a right to find security and peace in their own countries while freely professing their faith.”

Muslim and Christian religious and political leaders called for unity and dialogue in the face of regional threats on November 7-8, at a conference following the extraordinary Synod of Bishops on the family Oct. 5-19 at the Vatican. The lineup of more than 25 speakers at the patriarchate’s International Center for Dialogue of Civilizations included heads of Islamic sects, members of Lebanon’s Parliament and Catholic officials who had participated in the synod. They addressed the challenges of families in the Middle East, noting that more than 4 million people have been displaced in the region. 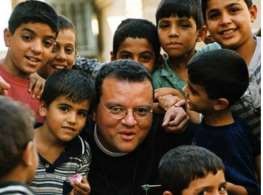 The Foundation for Relief and Reconciliation in the Middle East (FRRME), administered by Rev. Canon Andrew White, is providing food and other assistance to nearly 5,000 Iraqis of all religions. The Foundation also helps destitute parishioners pay their rent, provides funds for children to go to school, supports disabled Iraqis, and provides them with free medical services in what has become one of the best-equipped clinics in Baghdad.

The Cradle of Christianity Fund (CCF), led by the Institute for Global Engagement, has raised nearly $70,000 toward its goal of raising $25 million to help Iraq’s Christians and their communities survive through the winter. The mission of the Fund’s founders is to “assist in the rescue, restoration and return of endangered Christian communities in the Middle East.” The Fund was seeded with $1 million from television producer Mark Burnett and his wife, actress Roma Downey. Donations will go through the churches directly to those who need it the most, and primarily through the Ancient Churches.

Dr. Philip Jenkins, co-director of the Program on Historical Studies of Religion in Baylor’s Institute of Religion, recently wrote a research article that was featured as Christianity Today magazine’s November cover story. In the article, Jenkins discusses historical research and current events and questions whether persecution toward Christians in Iraq and Syria could lead to a complete extinction of Christianity in the Middle East. After looking at the current conflicts between religious and political groups, Jenkins said he believes the danger of Christianity draining out in the Middle East is a real possibility. 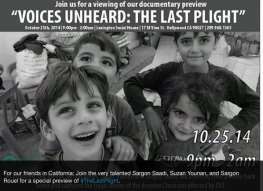 On November 23, “The Last Plight,” an upcoming documentary about the humanitarian crisis in Iraq after the horrific terrorists attacks of the Islamic State on Iraq’s second largest city Mosul and the Nineveh Plains, will be publicly released. There will be numerous advance screenings of the movie before the public release, including in Stockholm, Sweden on November 15 and in Los Angeles on November 22.