As ISIS persecution of Christians in Syria progresses, IDC aid to families fleeing to Lebanon continues.

The IDC Team in Lebanon, led by our board member Prof. Alexi Moukarzel, continues to work closely with the Chaldean, Syriac and Assyrian churches to assist newly displaced families who are arriving to Lebanon.

In a phone conversation Moukarzel described the situation. “These are people with so much dignity. They are not beggars or refugees, you know. They are the cradle of civilization and despite their current situation and everything they lost, they are not asking for anything. But we know what they need, through the churches, and we are trying our best to help.”
The Assyrian families have not stopped expressing their deep gratitude to all who have helped them.

*Read more about the plight of Syrian refugees in Lebanon in the IDC interview with members of the community, found at the conclusion of the Newswire. 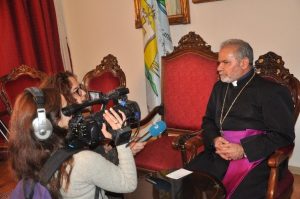 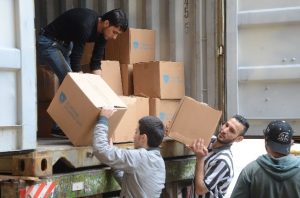 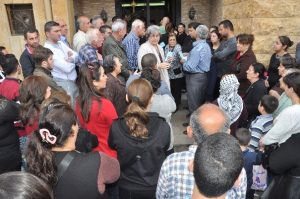 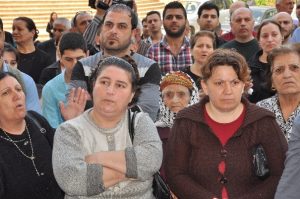 IDC celebrates the Orthodox Easter at the Chaldean cathedral with Orthodox and Catholic bishops, priests and faithful in Lebanon.

On April 15th, Catholic and Orthodox Christian communities united in the Chaldean Cathedral of Lebanon to celebrate together on the Orthodox day of Easter. The liturgy was dedicated to priests who had lost their lives in the latest wave of violence sweeping the region. The celebration was attended by bishops and priests from the Syriac Orthodox churches, the Assyrian church of the East, the Catholic Church, and the Greek Catholic Church. IDC representative Prof. Alexi Moukarzel was present in the ceremony along with other public figures from the government and educational sector. 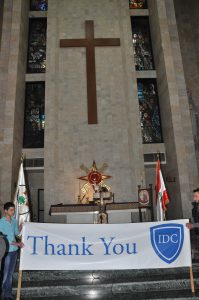 IDC at the United Nations

On April 17th IDC Executive Director Kirsten Evans was an invited guest and participate at a UNESCO-hosted event at the United Nations in New York, in collaboration with the permanent missions of Palau, the Holy See, and Argentina to the United Nations. The event, “The Persecution of Christians Globally: A Threat to International Peace and Security,” was an invitation to collaboration among various international religious, human rights, and aid organizations. Participants engaged the crisis religious intolerance in the Middle East as a threat to international peace and security, and highlighted the mass genocide of Christians taking place in the Middle East.
“The gathering was somber as we recounted the atrocities lived day-in and day-out by our brothers and sisters in Iraq, Syria, and beyond. But it was equally as heartening to see the potency of collaboration harnessed in the room, the sense of urgency that resounded across boundaries of creed and sector, and the determination of agents of international policy to demand a more decisive response to the crisis by the international community,” said IDC Executive Director Kirsten Evans.

The expected outcome of the meeting is an initiation of a resolution by the United Nations Security Council, General Assembly and the United Nations Human Rights Council on the Protection of Christians and other religious minorities in the Middle East.

IDC Meets with the Yezidi Delegation in the U.S and the Chaldean Chamber of Commerce.

On April 29th IDC received Murad Ismael, Representative of the Yezidi Delegation in the U.S., and Martin Manna, President of the Chaldean Chamber of Commerce in Michigan, to discuss the urgency of international collaboration across ethnic and religious boundaries toward common policy and humanitarian goals, in the interest of minority groups in Iraq and Syria and displaced religious communities across the region. IDC expressed solidarity with the Yezidi community and all religious minorities in the Middle East, and reiterated its determination to fight for the protection and preservation of minority religious communities and their human rights.

IDC Media and Public Appearances on the Rise 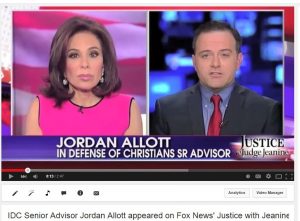 “A Genocide Remembered and Denied” by IDC Senior Advisor Andrew Doran, is published in First Things, America’s most influential Journal of Religion and Public Life.
http://www.firstthings.com/web-exclusives/2015/04/a-genocide-remembered-and-denied 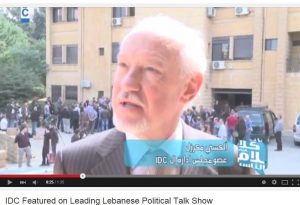 IDC Director of Media Communications and Outreach Ninar Keyrouz speaks at the Centennial Commemoration of the 1915 Seyfo Genocide, broadcast by ANB TV, about advocacy, awareness and humanitarian aid in support of Christians of the Middle East. 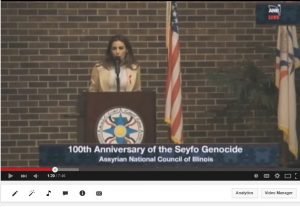 La Libre Belgique discusses the efforts IDC is making to bring together the Christians in the U.S. with IDC Director of Media Communications and Outreach Ninar Keyrouz.

IDC Stands with the Global Community Recognizing the Armenian Genocide

The following are excerpts from IDC statements in support of the international recognition of the Armenian international Genocide:
“Today, April 24th, is the hundredth anniversary of the events referred to as the ‘Armenian Genocide.’ Last week the European Parliament joined its voice with other international bodies in recognizing the Armenian Genocide in ‘memory of the one-and-a-half million innocent Armenian victims who perished in the Ottoman Empire.’ Germany and Australia are among the nations that also recently voiced recognition of the crime against humanity. In Defense of Christians (IDC) applauds the international community for its growing acknowledgment of this tragic episode in human history…
“In the face of the current ethnic cleansing of Christian communities in Iraq and Syria by the Islamic State, and the targeting of Christians by extremist groups in other parts of the world, acknowledgement of this dark chapter of history is imperative. Recognition, as highlighted by both the EU and Pope Francis, is not only necessary for reconciliation and healing, but to protect the world from repeating similar horrors. In the words of Pope Francis, ‘Only in this way will new generations open themselves to a better future and will the sacrifice of so many become seeds of justice and peace”…
“As we remember the Armenian Genocide on its centenary, IDC calls upon the global community to acknowledge the historic reality of the Ottoman genocide of the Armenian people and to work unremittingly to keep atrocities such as this from repeating in the Middle East today.

I recently contacted Father Yotron Ghilyani of the Assyrian Church of the
East and spoke with him along with Hanna Namo and Boukou Yokhanna, Syrian refugees in Lebanon, about the plight of refugees.

You are both from the thirty five villages of Khabor, Syria, that fell under ISIS. At what point did you decide to leave and how did you get here?

Hanna: We started waking up to the sounds of bombs in nearby villages, at around 4 am, in the region of Khabor. We sent the women, elderly and kids to another close village that was still safer, where buses were waiting to take them to Hasaka and Kamishli. Then they came to Lebanon and we followed them as ISIS was getting closer to our village.

Boukou: We had to crawl for 500 meters because there were gunmen firing and stray bullets flying at all times. We crawled till we got to the town where buses were waiting for us.

Did you see and ISIS militants or hear some of their threats?

Hanna: We didn’t see them, otherwise they would have killed us, but we heard their “takbir” as they were getting closer and we escaped.

What were you able to take with you?

Hanna: We barely took our ID papers, some of us couldn’t even get those. At the borders between Lebanon and Syria, the church had our names listed and they let us in very easily.

Father Yotron, what is their legal status now in Lebanon?

The first residency you get is for one week, but then the church is able to extend it for 6 months.

Is this costing you a lot of money?

Father Yotron: No. We did them for free. And for that we would like to thank the Lebanese government for all their help.

What happens after 6 months?

Father Yotron: We will have to see.

(Hanna continued by saying that he will apply through the UN to go to Australia, Boukou has already applied and is on the waiting list.)

Would you not like to go back to your homes in Syria?

Hanna: Go back for what? It has become unlivable over there People you used to drink coffee with and who were your friends and neighbors for a life time have turned against you, they are now fanatic and consider us “Koffar” (a term meaning blasphemy). How can I take my kids there?

Father Yotron, what is the status of the Assyrian hostages within ISIS now?

Father Yotron: All we know is that they are alive.

Are they all young men? Is it true they let the women, kids and elderly walk away?

Father Yotron: No, they only let around 20 people walk away. There is a child who is 4 months old, women, young men and 84 year old men.

Do you have any final words you would like to communicate to the international community?

Hanna: We have been persecuted and been losing our homes for hundreds of years. Enough. Pity us and stand by us. Especially the Assyrians, Chaldeans and Syriacs.

Hanna, Boukou and Father Yotron all expressed their gratitude to the Lebanese government for making it easier for Assyrians to migrate to Lebanon and obtain short term residencies, and to IDC for its assistance. 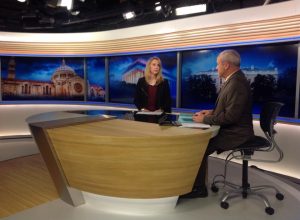