IDC President Toufic Baaklini and IDC Senior Advisor Andrew Doran recently met with Maronite Patriarch Bechara Al-Rai at the Patriarch’s residence in Beirut, Lebanon. The conversation addressed the situation of Christians in Lebanon and across the Middle East, and emphasized the importance of continuing to work together to help Christians in the region by increasing advocacy and awareness and encouraging policy making that respects freedom of religion and conscience. 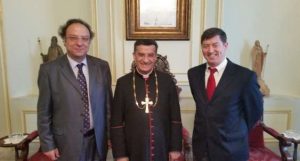 IDC Director of Government Relations and Outreach, Kristina Olney, attended a meeting at the White House with President Obama’s National Security Council staff. A Demand for Action played a key role in arranging the meeting and invited

IDC expresses its gratitude for the opportunity to share its message and advocate together with A Demand for Action on behalf of Christians in the Middle East. 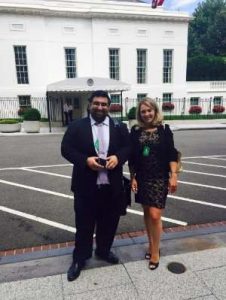 IDC President Toufic Baaklini issued a statement calling on the federal government to directly aid the Christians in Iraq. The statement made reference to IDC Director of Government Relations and Outreach Kristina Olney’s meeting with the White House National Security Council staff, which touched on the current state of Iraq and IDC’s concern for the plight of Christians and all religious minorities.

Baaklini highlighted a joint statement issued by Representatives Fortenberry, Eshoo and Denham that urged the President of the United States to defend Christians and all religious minorities facing persecution in the Middle East. IDC applauds the representatives for bringing attention to the situation of the Christians in the Middle East and advocating on their behalf. Fortenberry, Eschoo and Denham had met with the White House National Security team shortly before A Demand for Action Executive Director Steve Oshana and IDC Director of Government Relations and Outreach Kristina Olney met with the National Security Council staff at the White House. Fortenberry, Eschoo and Denham issued their statement a few days later; IDC shared the complete statement on its social media sites.

Baaklini’s statement concludes by advocating for a three-pronged approach of aid, immigration and empowerment, and strongly affirming the Christians’ right to remain in their ancestral homeland.

Skyline Future Conference combined entertainment with challenging and thought- provoking presentations and discussions with the goal of engaging and educating Christian pastors and leaders, and all followers of Christ. The conference covered a wide range of topics, including several related to religious liberty and the persecution of Christians.

IDC Director of Government Relations and Outreach Kristina Olney spoke to the audience of around 2000 conference participants. Kristina presented IDC and emphasized its mission to foster unity, advocacy, awareness and aid around issues pertaining to Christians in the Middle East. Kristina also highlighted some of IDC’s main accomplishments, such as its collaboration with multiple Eastern and Western churches, and its work with policymakers to bring about effective changes in the international community’s approach to helping Christians in the Middle East.

Bishop Mar Sarhad Yawsip Jammo, bishop of the Eparchy of St. Peter the Apostle (USA) and Mark Arabo, a Chaldean American community leader, also spoke about the situation in the Middle East and how to save the persecuted Christians.
Skyline Church follows the Wesleyan tradition and currently ministers to 40,000 people. Around 2000 people attended the Skyline Future Conference. 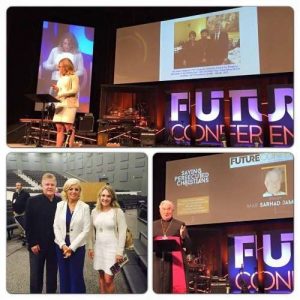 The IDC DMV (DC-Maryland-Virginia) Chapter met in Arlington, VA.
The Chapter thanked all those in the local community who helped organize and host the IDC summit in September 2014.

IDC Strategy and Outreach Consultant Drew Bowling updated the Chapter on IDC’s work with Capitol Hill. The Chapter extended beyond the Middle Eastern diaspora in the region, bringing together a diverse group of individuals from Armenian, Coptic, Russian Orthodox and Protestant communities. Chapter members showed a strong interest in IDC’s work, participated
actively in the discussions and expressed their commitment to helping the Chapter grow.

The DMV Chapter will plan another meeting in the near future to hold interim elections and begin preparing for the September 2015 National Leadership Convention. 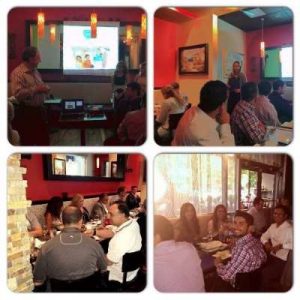 The event will begin on Friday, July 17, with Evening Prayer led by Chorbishop Sharbel Maroun (President, Noursat – USA), followed by a dinner and keynote address by Honorable Dave Trott (Congressman, Michigan District 11). Saturday will include various prayer services and ongoing adoration, a morning session titled “What Is Happening to Christians in the Middle East”, and an afternoon session, “How We Can Help”. The Symposium will conclude on Sunday with final remarks, a press release, and Mass at Mother of God Cathedral, presided by Bishop Francis Kallabat.

Kirsten Evans, Executive Director of IDC, will participate in a panel discussion on how to help Christians in the Middle East. As a co-sponsor, IDC has played an active role in preparations for the event, including lining up speakers such as Congressmen Trott, Edmund Gharib, Dr. Stanton and Robert Destro.

Tele Lumiere will broadcast this Symposium, enabling its reach to extend to a wide Middle Eastern audience. 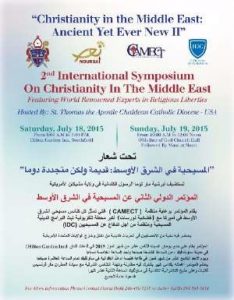 Upcoming Highlights
IDC will soon launch three new chapters in New York, New Jersey and Cleveland, OH.
The National Apostolate of Maronites (NAM) Convention is scheduled to take place in Cleveland, OH, July 1-5, 2015. IDC will have a booth at the event to raise awareness about its mission and purpose and invite convention participants to play an active role in supporting Christians in the Middle East and attend IDC National Leadership Convention this coming September 9-11, 2015.