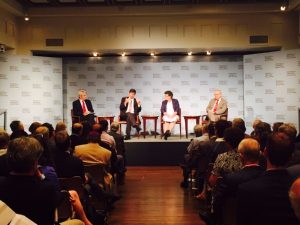 On 24 June, IDC Senior Advisor Andrew Doran participated in a Council on Foreign Relations (CFR) panel with Faith McDonnell, director of the religious liberty program at the Institute on Religion and Democracy, and David Saperstein, ambassador-at-large for international religious freedom at the U.S. Department of State.

Hosted by National Public Radio’s Thomas Gjelten, the three speakers discussed the state of religious pluralism in the Middle East, focusing on the effects of political instability on religious minorities, the unexpected rise of ISIS and the worst case scenarios that could follow from its expansion, the persecution of Christians and Muslim minority groups in the region, and the U.S. approach to preserving religious freedom.
To view a video of the panel discussion or to read the complete transcript, click here: http://www.cfr.org/middle-east-and-north-africa/future-religious-pluralism-middle-east/p36689 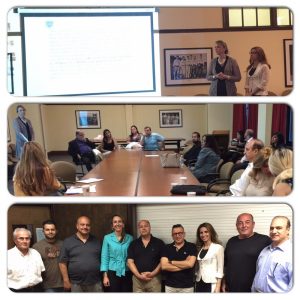 In New York, the chapter meeting was held at the Manhattan Regis High School, and included a large and diverse crowd of people, including some from the United Nations and others who knew very little about the situation or IDC, but who were eager to learn more and find out how they could help.

At the New York meeting, one attendee from Iraq shared a powerful testimony of what ISIS is doing to Christians in the region, thus highlighting another purpose of the IDC chapters: to give people from the region a chance to tell their stories and give a human face to a tragedy that has uprooted millions of people but can sometimes seem remote from the daily lives of people in the West.

In New Jersey, the meeting at the St. Ann Melkite Church gathered a smaller crowd, but with one important factor in common: all had families back in the Middle East, and all are deeply involved in the struggle to help their loved ones build a new life or find their way forward in uncertain times. 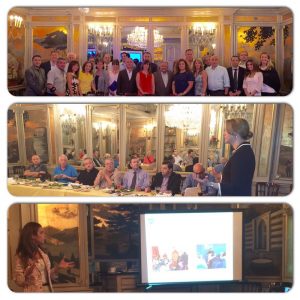 The Cleveland chapter meeting gathered a large crowd of diaspora Christians from the region. The participants’ interest in IDC was so strong that they requested that the meeting be extended to a second day for a new group of people that they themselves invited, where IDC President Toufic Baaklini was able to personally presented IDC’s goals and program of action.

Chaldean Advocates Meet with IDC about future of Christians in Iraq 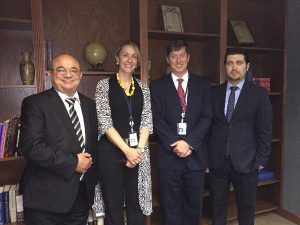 The CSAPC, a political party that advocates for greater autonomy for Iraq’s Assyrian population, is also concerned about the survival of Christianity in Nineveh and Iraqi Kurdistan. The purpose of the meeting was to discuss strategies and emerging opportunities in American foreign policy toward greater protection of Christian communities in Iraq and Syria 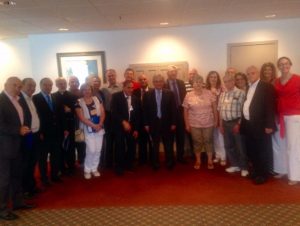 IDC’s representatives were present at many events throughout the convention, spoke in many panels and meetings building coalitions with IDC, and also received awards on behalf of the organization.

Before the convention, Kirsten Evans presented IDC to the NAM Board to discuss means of collaboration across the efforts of NGOs with shared values for preserving Christianity in the Middle East. 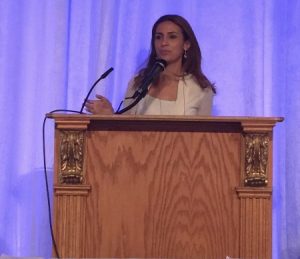 Ninar Keyrouz spoke to the convention audience about IDC and also promoted the July 4 September National Leadership Convention, highlighting the fact that it gives Middle Eastern Christians a platform to share their story and make their voice heard. 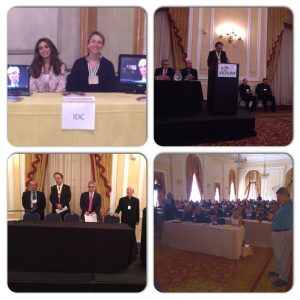 Later that day, IDC representatives were invited to a luncheon hosted by the World Patriarchal Maronite Foundation (WPF), which chose to honor Ambassador Gilbert Chagoury, who is IDC’s honorary chairman. Since Chagoury was unable to attend, IDC President Toufic Baaklini accepted the award on his behalf.

After the luncheon, Toufic spoke about Maronite Americans and how US foreign policy impacts the Middle East. He highlighted the important role of Lebanon’s Christians in helping other Middle Eastern Christians navigate these times of so much upheaval and loss. 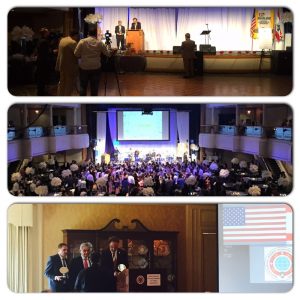 On the final night of the convention (July 4), IDC was featured at the 1,300 person banquet, where a video highlighting IDC work in political advocacy was aired. Toufic Baaklini also publicly accepted the award for Ambassador Chagoury and gave an address in which he encouraged Lebanese Christians to use their gifts of organization to help the besieged Christians of Iraq and Syria.

The Lebanese Examiner, which is a leading Lebanese newspaper in North America, interviewed IDC President Toufic Baaklini about IDC’s goals and its current efforts to help Middle Eastern Christians.

To read the interview, click on this link:
http://www.lebaneseexaminer.com/2015/07/03/in-defense-of-christians-group-calls-for-direct-aid-to-middle-east-minorities/

Additionally, Ninar Keyrouz had an interview with NourSat, which is a worldwide Middle Eastern Christian Network, to discuss IDC and the importance of the IDC National Leadership Convention 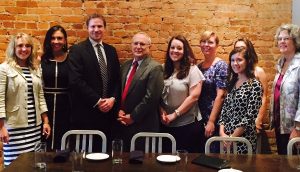 IDC Director of Government Relations and Outreach Kristina Olney joined other NGO representatives from International Christian Concern, Open Doors, World Vision, Jubilee Campaign, ACLJ, and Christian Solidarity Worldwide for a meeting with Ambassador for International Religious Freedom David Saperstein to discuss policies regarding the protection and preservation of religious freedom worldwide, including the Christian communities in the Middle East.