On June 25, Steven Howard spoke with parishioners at St. Elias Melkite Catholic Church in San Jose, CA about ways in which the new San Francisco Bay Area chapter can advocate for and spread awareness about the plight of Christians in the Middle East.

On June 23, Steven Howard met with Fr. Barouyr Shernezian of St. Gregory Armenian Apostolic Church of San Francisco and  the Armenia National Committee of America San Francisco Bay Area chapter to discuss ways in which their community can work with IDC in the Bay Area to advocate for the protection of Christians in the Middle East.

On June 21, IDC Executive Director Philippe Nassif and Steven Howard met with the new IDC Orange County Chapter, chaired by Dotty Hage, at St. John Maron Maronite Catholic Church in Orange County, CA to discuss the work that their chapter can do in advocacy and outreach in Southern California. 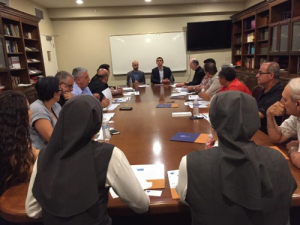 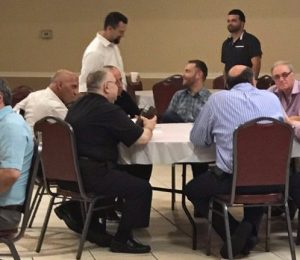 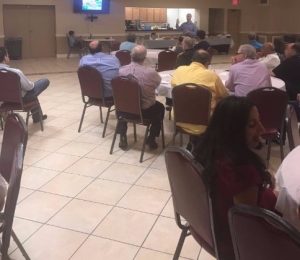 Left: IDC Boston Chapter Chair Ziad Saab speaking with his fellow parishioners at St.  Anthony’s.
Right: Steven Howard speaks with the Lawrence  community about the important advocacy work that IDC chapters do with their members of Congress. 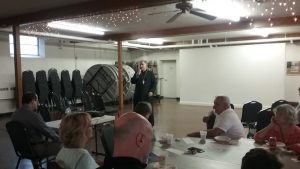 Above: Father Thomas Steinmetz, parish priest at Our Lady of the Cedars and IDC New Hampshire Chair, led the community in  a word of prayer before the town hall began.

On June 12, IDC National Board Member Tonia Khouri and the Chicago Chapter met with Cynthia Bajjalieh, Director for Constituent Services for the Office of Senator Dick Durbin, in Chicago to discuss the Security and Stability of Lebanon. 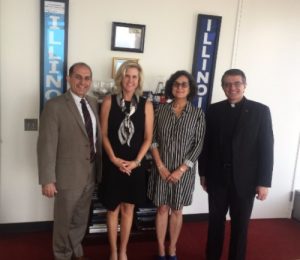 Newsweek, June 28, Isis in Lebanon: The Courage of a Christian town on the frontline of Jihad.An Op-Ed by IDC Vice President and Senior Policy Adviser Andrew Doran.
“One year after the suicide bombings, a monument to the five men who were killed stands near the St. Elias statue. Yosef does his best to care for George’s widow, who needs constant medical attention, and his brother’s two children.”

National Catholic Reporter, June 16, Chaldeans in US: Why aren’t more Christians speaking out against deportations to Iraq?
“..we aren’t seeing a lot of these other larger voices in the community standing up for the Iraqi Christians,”

Christian Post, June 7, House Passes Bill That Would Fund Christian Relief Efforts for ISIS Genocide Victims  “Unless Christians begin receiving assistance from the international community, including from the U.S. government, they are going to continue leaving Iraq, which I snot in the interests of the United States,” IDC Executive Director Philippe Nassif said in a statement

World Magazine, une 8, House advances genocide bill “This is an issue that everyone who works in this space has recognized,” Nassif said. “You have a situation where there are not enough people at State to handle everything being given to them. They are overwhelmed.”

Christian Daily, June 10, US House passes bill to authorize government funding for relief efforts for ISIS victims IDC executive director Philippe Nassif explained that the new bill will ensure that U.S. funding will reach the displaced minorities who are in need of assistance.

Politico, June 13, Trump’s move to deport Iraqi Christians stirs outcry  “These are people that are deeply traumatized. They latched onto his message of ‘We’re going to protect you.’”