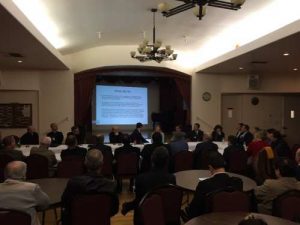 The meeting in Los Angeles was hosted by Bishop Zaidan at our Lady of Lebanon Church (photo above.)

News From Around the World

Angelina Jolie left “speechless” by the suffering she witnessed during her last visit to refugee camps: urges West to support and aid the refugees of conflicts in Syria and surrounding regions.

Christians in the Mideast caught without safety supports, while Western Christians are “reluctant to acknowledge” the challenges they face Alan Cowell writes.

Sisi’s Christmas visit to Coptic Christians a hopeful gesture for the future of religious pluralism in Egypt, says Mark Movsesian.

Young people deliberately targeted in Syrian car bomb attacks, Jesuit priest wonders where reaction is from rest of the world.

Amid trying circumstances, parents in refugee camps seek out education for their children