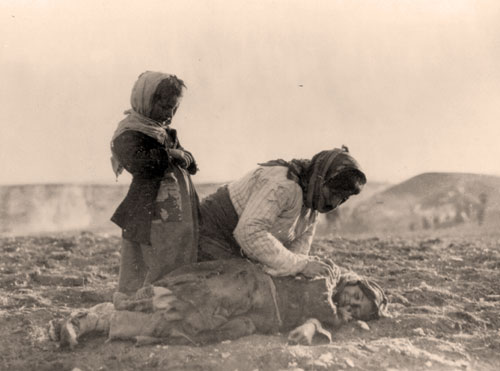 Armenia was the first nation to adopt Christianity as its state religion in the early fourth century. The persecution of Armenians over the centuries has stemmed in large part from their refusal to renounce their apostolic faith. Armenian nationals number approximately three million.  However, millions of Armenians live elsewhere in the world, including perhaps as many as a million in Egypt, Iran, Iraq, Lebanon, and Syria.

The Armenian Genocide – a known case of genocide, documented in the U.S. archives and through an overwhelming body of first-hand, governmental, and diplomatic evidence – remains unacknowledged by Turkey and unpunished by the international community. Denial of this genocide set the stage for subsequent atrocities, including genocide and other crimes that have taken place recently. Turkey’s campaign to escape responsibility for this atrocity constitutes an ongoing crime against the victims, their descendants, and humanity. Turkey also represents a threat to Armenia, a predominantly Christian nation, which has welcomed victims fleeing recent violence throughout the region.

Prior to the Armenian Genocide of 1915, the territory of modern-day Turkey was home to a large, ancient, and indigenous Christian population, comprised of millions of Armenians, Greeks, Pontians, Assyrians, Chaldeans, Syriacs, and other Christian peoples.  Today, Christians account for less than 0.1% of Turkey’s population.

The Ottoman Empire killed over 1,500,000 Armenians, Greeks, Assyrian-Chaldean-Syriacs and others, exiled the Armenians from their historic homeland, and deported hundreds of thousands of its other Christian citizens.  Many of the victims were killed expressly because they would not renounce their Christian faith.

The media attention resulted in a mass outpouring of U.S. humanitarian assistance through the Congressionally-mandated Near East Relief (now Near East Foundation) that collected donations from over 40 individual state committees throughout the country.

There is a growing international consensus that the Turkish government committed genocide against Armenians, Greeks and Assyrian-Chaldean-Syriacs, beginning in 1915. The genocide has been recognized by the European Parliament, the governments of twenty-nine countries including the United States.

In order to bring justice to the victims of genocide, the U.S. government, at the highest levels, should:

Work toward equitable, constructive, stable, and durable Armenian-Turkish relations based upon the Republic of Turkey’s full acknowledgment of the facts and ongoing consequences of the Armenian Genocide, and a fair, just, and comprehensive international resolution of this crime against humanity.