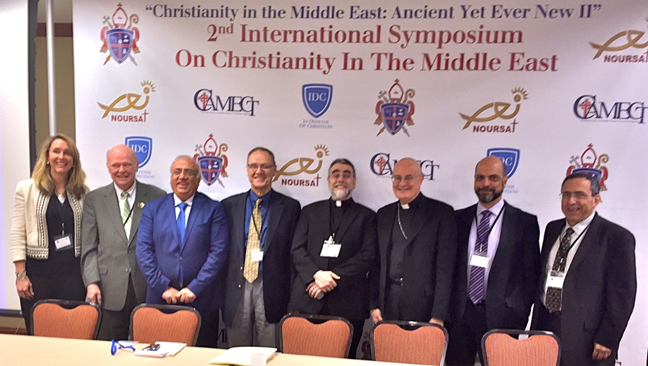 “At the Symposium entitled ‘Christianity in the Middle East: Ancient Yet Ever New II,’ held the weekend of July 17-19, 2015, in Southfield, Michigan, participants learned the tremendous transforming power of the love and forgiveness of Jesus Christ, who still works in the hearts of his followers in the Middle East and throughout the world. They were likewise sobered by the distressing presence and persistence of ISIS. In direct response, they were emboldened to encourage members of the international community to pursue criminal charges of genocide against ISIS.

“Dr Gregory Stanton, Founder and President of Genocide Watch, described the ten stages of planned and premeditated genocide, his tenth stage being ‘denial’. There is no doubt that ISIS and other similar groups have a premeditated intention to destroy those who think differently from them, and the world seems to be in denial. But to the 350 people gathered this weekend there was no denial.

“The weekend was a joint effort of CAMECT (Christian Arab and Middle Eastern Churches Together), IDC (In Defense of Christians), Tele Lumiere (the official Christian Television station in the Middle East, headquartered in Lebanon), and the Chaldean Catholic Community of Detroit. This joint effort was good opportunity to help each of the groups, as well as participants, to outreach, advocate, and to speak out with one voice.

“The Symposium featured a wide array of experts in the area of Genocide, Humanitarian Aid, Media Relations, and Political Activism. We began on Friday with an address by Congressman Dave Trott, followed by a beautiful ambiance created by the spiritual hymns of Doris Farhat. The next day, was divided in 2 sessions. The first addressed the current situation of the Christians in the Middle East, and the second what can be done about it.

“Ecumenical prayer services, lectures, discussions, and questions and answers periods, allowed participants to come away with a new found enthusiasm to reach out to other Christians, build bridges to Muslim leaders, advocate with government agencies, promote in the media the story of Christians in the Middle East, to build a grassroots effort to address the suffering of Syrian and Iraqi citizens, and to support all humanitarian and political solutions to the violence inflicted on them.
“It was the common consensus that Christians of the Middle East find in terrorist groups a common cause, and need to continue to unite in one front to resist their dangerous expansion. Thanks be to God, the spirit of communion and ecumenism of the different Middle Eastern Churches manifests itself today by regularly scheduled meetings, joint resources, and ecumenical prayers. All participants agreed that the war being waged in the Middle East at the present time is a spiritual war against the forces of evil and that through continuous prayer, fasting, and common resolve, faith in our Lord Jesus Christ will provide the ultimate triumph of love.”