Philippe Nassif is the Executive Director of In Defense of Christians (IDC). Philippe has worked in issue based advocacy and political organizing for over a decade.

Philippe’s work in politics and advocacy is shaped by his family history of immigration and entrepreneurship. He is the first of his family to be born in America–his father being Lebanese and his mother Mexican. Mr. Nassif’s career spans working for Houston, Texas Mayor Annise Parker’s administration, The White House, President Barack Obama’s campaign, and more recently at the poverty fighting organization CARE USA, where he built and oversaw advocacy efforts and managed relationships with elected officials across 15 states. He also ran for a citywide Houston City Council position in 2015, defying expectations as a young candidate and garnering high profile endorsements from Members of Congress and The Houston Chronicle, while garnering wide bi-partisan support. As Executive Director of IDC, Philippe is tasked with designing and implementing the strategic vision of the organization, growing membership, managing the staff, and representing the organization in Washington DC and across the country. Mr. Nassif holds an MA in International Conflict Resolution from St. Mary’s University and a B.A. in International Studies from the University of St Thomas. 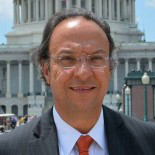 Toufic Baaklini is a Lebanese-American with more than 30 years of business experience in finance and development. Mr. Baaklini has committed years of service to preserving the historic Christian communities of the Middle East. To this end, he has testified before Congress, met with officials at the State Department and National Security Council and other high-ranking officials. He lives in the Washington, DC area.